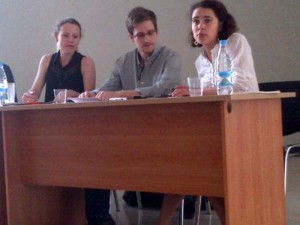 NSA fugitive Edward Snowden has met with Russian civil rights activists from his current base at Moscow’s Sheremetyevo airport, and made a renewed request to seek asylum in Russia.  His request has received support from State Duma Speaker Sergei Naryshkin and Federation Council Speaker Valentina Matviyenko on the basis that certain states in the U.S. would seek the death penalty against the leaker.  U.S. President Barack Obama and Russian President Vladimir Putin have discussed the matter by telephone following an earlier warning from Washington that Russia giving the leaker asylum would provide him with ‘a propaganda platform’.  Russia maintains that it has in fact not received a formal application from the American for political asylum.  ‘[T]o list Putin’s Russia, as Snowden did, among his little list of countries for “being the first to stand against human rights violations” suggests a dangerous moral relativism’, argues this article.

Miriam Elder finds opposition leader Alexei Navanly fearless despite the fact that a guilty verdict in the trial against him ‘is taken as a given’.  The Power Vertical podcast mulls the Navalny case here.  Jamison Firestone, Sergei Magnitsky’s former employer has penned a searing condemnation of the guilty verdict against the late whistleblower in the Moscow Times.  A British coroner says authorities have rejected his request to hold a public inquiry into the killing of former spy Aleksandr Litvinenko.  Russian investigators are examining the death of TV host and former investigator Boris Tarasov.

Three former Morgan Stanley executives have left the Russian Regional Development Bank, owned by oil giant Rosneft, though officials have denied a rift between the executives and boss Igor Sechin.  Meanwhile, Dominique Strauss-Kahn, the disgraced former head of the International Monetary Fund, has been appointed to the bank’s supervisory board.  The Kremlin has indicated it would provide financial support to restive Egypt if such a request is made. The largest military-readiness drill since the Soviet era is currently taking place in Russia’s Far East.