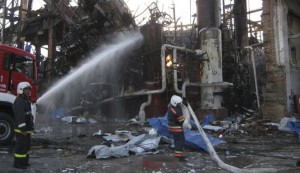 Russia has restricted gas supplies to Ukraine after the deadline for payment of $1.95 billion owed for previous purchases passed yesterday.  A spokesman for Gazprom stated that total arrears currently amount to more that $4.4 billion.  The company’s CEO Alexei Miller has indicated that Ukraine threatened the company with siphoning if it did not receive a ‘super-low’ gas price.  Whilst some are concerned that supplies to the rest of Europe may be affected, Gazprom has assured Western clients that this will not be the case.  Bloomberg argues that Russia cannot afford to aggravate tensions with the West over gas, since it requires technology from Western companies to unlock its oil riches.  A buoyant appearance from Exxon Mobil Corp CEO Rex Tillerson alongside Rosneft CEO Igor Sechin at the World Petroleum Congress suggests some companies remain unconcerned about the risks of cooperating with Russia.  Sechin, ‘widely considered Russia’s highest paid executive,‘ has managed to avoid publishing his income declaration for 2013.  BP’s latest world energy review has found Russia to be the world’s leading energy exporter.

Foreign Minister Sergei Lavrov has castigated his Ukrainian counterpart Andriy Deshchytsia for publicly insulting Russian President Vladimir Putin on the weekend.  For Moscow, Deshchytsia simply does not exist any more, says Russia’s ambassador to the UN, Vitaly Churkin.  Ukraine’s National Security Council chief says that Russia has amassed as many as 38,000 soldiers on its borders with Ukraine.  Moscow, which claims that more than 100,000 people have fled across its border to escape violence in eastern Ukraine, has suggested that the West follow its example in its humanitarian assistance policy to Syria.  Conflicts between Russia and NATO have led to a temporary suspension of a significant antiterrorism project called STANDEX, NATO’s largest civilian funding program.  Despite tensions with Washington, the construction of a new Russian Orthodox church in Paris suggests that Paris-Moscow ties remain strong.

Elena Kotova, Russia’s former top representative at the European Bank for Reconstruction and Development has been found guilty of seeking a bribe of more than $1.4 million.  Journalist Galina Koshcheyeva, who has been missing for several days, has been found dead in Russia’s Kirov region; investigators believe a domestic dispute may be the cause.  Seven people have been killed after an explosion at an oil refinery owned by Surgutneftegaz in Siberia.

PHOTO: Seven people were killed on June 15, 2014, in a fire at at Russia’s Achinsk oil refinery in Siberia. (Reuters)