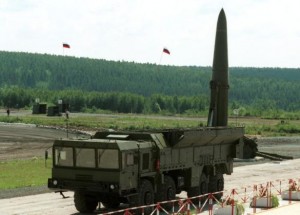 Ukrainian President Viktor Yanukovych is due to touch down in Moscow today for a meeting with Vladimir Putin, at which a ‘raft of substantial deals‘, including loans to the tune of $15 billion are expected to be signed.  Whilst concern over the economic situation in Ukraine mounts, it has been reported that Russian banks’ exposure to Ukraine is ‘quite insignificant’ and amounts to less than 1% of their assets.  At a meeting with his 28 E.U. counterparts in Brussels yesterday, Foreign Minister Sergei Lavrov apparently showed little inclination to make headway on the issue of the crisis in Ukraine.  Kyrgyz President Almazbek Atambaev has rebuffed the idea of joining the Moscow-led customs union, (now in many camps it seems a byword for bullying) on the basis that its road map was ‘prepared without Kyrgyzstan’s involvement.’

The U.S. along with Poland, Latvia and Lithuania have expressed alarm after the German daily Bild reported that Russia has deployed nuclear-capable missiles to the E.U.-bordering exclave of Kaliningrad.  Russia has confirmed the deployment of Iskander-M missiles but insisted that the move is consistent with international agreements.  At a meeting of the U.N. Security Council, Russia’s ambassador Vitaly Churkin lambasted the council for failing to respect Moscow’s demands for proof of the Syrian government’s involvement in chemical weapons attacks.  According to ITAR-TASS, Russia itself has destroyed 77% of its chemical weapon stocks.

Pussy Riot member Nadezhda Tolokonnikova will spend the rest of her sentence in the prison hospital to which she was transferred following a hunger strike.  The punk rock agitator is apparently keeping up with music whilst in jail.  A Duma Committee has advised the lower house of parliament to pass the draft amnesty law for the release of 10,000 prisoners this week.  Rumour has it that St. Petersburg governor Georgy Poltavchenko may step down before the next elections.