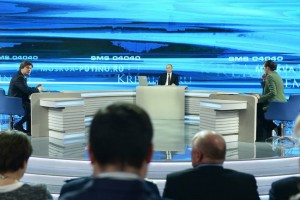 In Vladimir Putin’s ‘confident’ performance at his live Q&A session (his 12th, during which he answered 85 questions) he attacked sanctions imposed by the West over Russia’s actions in Ukraine as ‘a violation of human rights‘.   He added that annexing Crimea was partly to do with NATO’s eastward expansion, though he was quick to assert that the Western military alliance does not inspire fear in the Kremlin.  The President argued that trust between Moscow and Washington had been undermined for some time, ‘but we do not think we are to blame‘.  Nonetheless he reassured a six-year-old who asked the question of whether President Obama would save him from drowning with an affirmative response.  Can Europe stop buying Russian gas? ‘In my view, it’s impossible‘.  The President also assured viewers that a drop in oil prices from $90 to $85 per barrel would not seriously affect the economy.  The Q&A’s most unexpected moment came in the form of a question about the Kremlin’s use of surveillance from NSA whistleblower Edward Snowden, in response to which Putin asserted that intelligence was ‘under the strict control of the state and society‘.  Putin also threw an apparent lifeline to threatened independent TV station Dozhd (Rain) and informed viewers that he has no intention of remaining president for life.

In Eastern Ukraine, TV viewers had no choice but to watch the Q+A after armed men reportedly took control of a television tower and switched it to Russian channels.  Defying skeptics, four-party talks in Geneva on the Ukraine crisis did conclude with a joint agreement to cease all violence in Ukraine and to ensure that illegal armed groups are disbanded.  Kiev has said it will impose stricter border controls on Russian men trying to enter the country.  Jews in the eastern Ukrainian city of Donetsk have apparently been told by pro-Russian militants that they have to register themselves and their property.  The city’s coal basin, which is three times as large as the Ruhr coalfield in Germany, is an alluring prospect for Moscow, argues this op-ed.  Vladimir Putin has asserted that the costs of financial assistance to annexed Crimea should not exceed 100 billion roubles this year.  Trade turnover between Russia and Ukraine has decreased by nearly 20% since the beginning of the year.