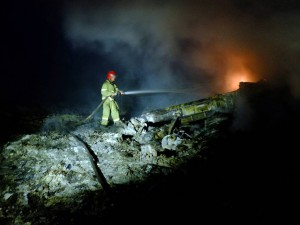 A Malaysia Airlines jet carrying 298 passengers and crew has crashed in eastern Ukraine, 60 kilometers from the Russian border, killing all on board.   The aircraft was flying just 1,000 feet above restricted airspace when it was shot down, beyond the range of smaller rockets used by the rebels to bring down helicopters and other low-flying Ukrainian military aircraft, but within the range of the SA-11 Buk missile which the majority believe to have been the weapon used to bring down the aircraft. Who was responsible remains a source of contestation: the leader of the self-proclaimed Donetsk People’s Republic in eastern Ukraine, Alexander Borodai, has put the blame on Ukraine.  Meanwhile, Ukraine, whose President called the attack an ‘act of terrrorism‘, says its security services have intercepted conversations which prove that Russia and pro-Russian separatists were responsible for downing the MH17.  Transcripts of the brief recordings can be found here.  President Putin has conveyed his condolences to Dutch Prime Minister Mark Rutte over the accident, calling for an objective investigation.  The leaders of the self-proclaimed Donetsk People’s Republic have said they will allow international specialists to investigate the crash.  Australian Prime Minister Tony Abbott has blamed Russia for the tragedy, a view apparently shared by Hillary Clinton.  Analyst Masha Lipman says that if proof of Russian culpability emerges there will be ‘strong pressure on Putin to really contribute to de-escalation‘.   ‘The downing of a Malaysian airliner over eastern Ukraine could be a turning point for the Ukraine crisis‘.

The Kremlin has denied that it was responsible for bringing down a Ukrainian An-26 transport jet on July 14th.  Approximately 33,000 Ukrainians have applied to Russia’s Federal Migration Service for refugee status and temporary shelter as of mid-July.  Journalist Pavel Sheremet has quit Russia’s Public Television, ORT, in protest at the Kremlin’s current policies on Ukraine.  Gas producer Novatek says that extended US sanctions will hardly affect its activity.  Former Finance Minister Alexei Kudrin has described the sanctions as ‘soft‘, a view shared by Maxim Osadchy, head of analysis at Corporate Finance Bank.  Morgan Stanley does not believe new U.S. sanctions on Rosneft will derail a pending deal between the two companies.

The European Court of Human Rights has ordered the Russian government to pay two of its citizens compensation for ‘inhuman and degrading treatment‘ by keeping them in metal cages during their court proceedings in an earlier trial, a custom ‘incompatible with the standards of civilized behavior that are the hallmarks of a democratic society‘.

PHOTO: A firefighter sprays water to extinguish a fire, amongst the wreckage of the Malaysian airliner after it crashed, near the town of Shaktarsk, in rebel-held east Ukraine. (Dominique Faget /AFP/Getty Images).