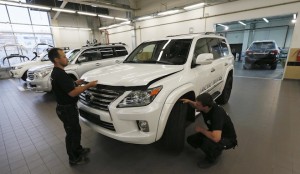 Russian and Ukrainian foreign ministers are currently in Berlin along with German counterpart Frank-Walter-Steinmeier and France’s Laurent Fabius for talks over ending the conflict in eastern Ukraine.  ‘Some progress‘ was noted by the German Foreign Minister.  ‘Five hours of most difficult talks. But we’d need several five-hour [talks] to see any progress‘, tweeted Ukraine’s top diplomat Pavlo Klimkin.  Significantly, the foreign ministers did reach an agreement on the delivery of humanitarian aid, approved by the Red Cross, to southeastern Ukraine.  This comes after a turbulent weekend; on Sunday pro-Russia rebels shot down a Ukrainian MiG-29  fighter jet and at least ten civilians were killed and another eight wounded in the Ukrainian army’s shelling of Donetsk.  On Friday, Ukraine claimed to have destroyed a column of Russian military vehicles in the east.  In a Youtube video Alexander Zakharchenko, Prime Minister of the self-declared Donetsk People’s Republic, announced he had 1,200 fighters ‘trained in Russia‘ under his command as well as 30 tanks.  These claims have been denied by the Kremlin.  Ideas propagated by a leading Russian nationalist, ‘have become to an extent practically the principal line of Russian foreign policy‘.

A Moscow court has found four suspects in the 2012 anti-Putin Bolotnaya Square rallies guilty of participating in mass riots and attacking police officers.  Whilst the Kremlin successfully blocked efforts to hold a march in favour of Siberian independence, at least nine activists demanding greater regional autonomy were detained by police in Siberian cities over the weekend.  Those organising rallies say their proposals are not dissimilar to those approved by President Putin in eastern Ukraine.

It is reported that Russia may extend its tit-for-tat retaliatory sanctions against Western nations to include a ban on imports of cars. Reuters examines the intertwining of Morgan Stanley and Rosneft.  With U.S.-Russia relations already at a low ebb, the arrest of hacker Roman Seleznev, the 30-year-old son of a deputy in Russia’s lower house of parliament, accused of stealing credit card data from U.S. consumers, is unlikely to help matters.  Five years on, those bereaved in the Sayano-Shushenskaya hydroelectric plant disaster are still awaiting justice.

PHOTO: Russian mechanics work on an Arctic Trucks all-terrain vehicle, based on the Lexus LX570 car, at an assembly shop of the Arctic Trucks Russia plant in Krasnoyarsk, Siberia. (Ilya Naymushin / Reuters)