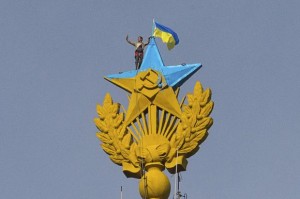 EU foreign policy chief Catherine Ashton has expressed disapproval at the ‘disproportionate‘ sentences meted out to Bolotnaya square activists earlier this week, since they ‘curtail the exercise of freedom of expression and of assembly in Russia‘.  Activists have re-painted one of Moscow’s Stalin-era Seven Sisters high-rises with Ukraine colours.  Initially charged with vandalism, the perpetrators of the paint job now face hooliganism charges, which could land them up to seven years in jail.  Russia has shut down four McDonald’s restaurants in Moscow for alleged ‘sanitary violations‘ and will conduct checks at the fast food outlet in two more regions.  Russia’s government has apparently relaxed some of its bans on Western food to support its own agricultural industry; the agriculture minister says billions of dollars will need to be spent to ensure food supplies are ample.  Russia will now look to China and India for meat imports previously sought from the West.

Austria’s Raiffeisen Bank International, which has nearly 2.8 million customers in Russia, has said it expects no significant impact from western sanctions. VTB, Russia’s second biggest bank, estimates the negative effect from the Ukraine crisis at $220 million in the second quarter of 2014.  Fertiliser company Phosagro has seen its first-half net profit grow 70%, year-on-year.

Konstantin Dolgov of the Foreign Ministry has used detentions of journalists in Missouri to highlight Washington’s ‘double standards‘ when it comes to media freedom.  Click here to find out how two brides managed to make it to the alter in Moscow.

PHOTO:  A man takes a ”selfie” as he stands with a Ukrainian flag on a Soviet-style star re-touched with blue paint so it resembles the yellow-and-blue national colours of Ukraine, atop the spire of a building in Moscow August 20, 2014. (Reuters/Ilya Varlamov)