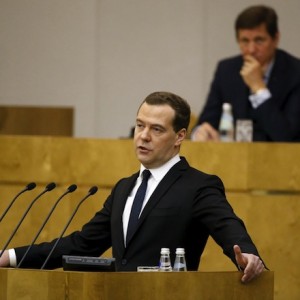 In his annual speech to parliament, Prime Minister Medvedev admitted that in 2014, Western sanctions accounted for the loss of $26.7 billion, or 1.5% of GDP, and that this year that sum may well increase.  Nonetheless, the return of Crimea, ‘which in its significance is equivalent to the fall of the Berlin Wall, the reunification of Germany or the return to China of Hong Kong and Macao’ said the Prime Minister, fully justified the financial losses incurred.  The state-run Public Opinion Research Center has found that Russians are currently more positive about their country than they have been in the past five years.  The New York Times sees the current scourge of wage arrears across the country as a source of potential popular unrest.  For Russia’s banks to regain stability, they need to lure back the savers who have turned to keeping their cash at home, says Sberbank.  Swiftly following on from President Putin’s assertion that officials should be held responsible for damage caused by recent wildfires in Siberia, investigators have arrested the chief of a local fire department for negligence.

In protest against the conditions of his detention, imprisoned opposition activist Sergei Mokhnatkin has slashed his wrists and been hospitalised.  Ecologist Yevgenia Chirikova tells RFE/RL about her motives for leaving Russia to work in Estonia, not least because ‘we are going through a period in which practically all my friends who were involved in public life have either been killed or put in prison’.  The site also offers a round up of other Russians who have chosen to leave the country following clashes with the authorities.  An LGBT activist has created a compilation of violent insults thrown at her on social media which she has offset with incongruously appealing pictures of their authors.

After many years in the making, Russia claims it should have the world’s first floating nuclear power station ready in 2016.  Facing the prospect of a huge loss in tax revenues, oil giant Rosneft has requested emergency state funding in order to be able to pursue its oil field developments.  Gazprombank, which enjoyed a profitable 2013, has reported a net loss of $260 million in 2014, hit by the economic downturn.  Looking increasingly eastwards in its business ties, Russia’s Skolkovo Foundation and Chinese investment group Cybernaut have agreed to launch a $200 million venture fund which will see the two states cooperate on a raft of high technology projects.