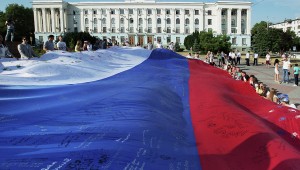 A Russian court has ordered that the four Muscovites who hung the Ukrainian flag from a Moscow tower should be placed under house arrest.  Two Russian daredevils have hung the Russian flag from a neighbouring tower in retaliation.  Six workers are being investigated after painting a Moscow transmission tower Ukrainian colours, which they maintain was not done on purpose.  The first trucks from the dispute-loaded Russian aid convoy to Ukraine have cleared customs in the country’s east.  The Foreign Ministry has expressed exasperation at delays to the convoy’s progress.  With opinions on Ukraine causing public divisions, the Moscow Times takes a look at the current state of Russia’s political opposition movement.  This article considers how Putin hopes that Russian media expansion in Europe will ‘illuminate abroad the state policies‘.

‘The text on the [milk] packaging says ‘local farmer?’ Well I’m afraid that everything else is foreign‘: Dmitry Potapenko, the founder of the Pyatyorochka supermarket chain on the problems of Russia’s import ban.  Is it a coincidence that a group of businessmen with close links to the Kremlin are poised to benefit from the tit-for-tat sanctions?   Two weeks after their introduction, Russia’s bans on Western food imports have provoked major price increases in remote parts of the country, increases which look set to become widespread in the near future.  Danish brewer Carlsberg, which is reliant on the Russian market for 35% of its profits, is avoiding hiking up prices by reducing the size of its bottles.  Jack Daniel’s is also in an uncomfortable spot.

Tokyo says Russia has seized a Japanese whaling patrol vessel after it allegedly entered the country’s territorial waters in the Sea of Okhotsk.  Yelena Baturina, the wife of ex-Moscow Mayor Yury Luzhkov, has held on to the top spot in Forbes list of Russia’s richest women.