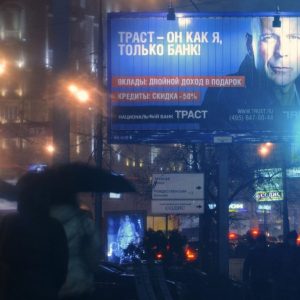 The Central Bank has intervened to bail out Moscow’s Trust Bank which is on the verge of insolvency, issuing a loan of $500 million at the current exchange rate.  Former Finance Minister Alexei Kudrin has castigated the government for its slow response and failure to announce a concrete strategy to deal with what he says will transform into a ‘fully-fledged economic crisis‘, in which Russia’s sovereign debt rating will likely be classified as junk.  According to the median of a Bloomberg estimate by 20 economists, the risk of the country falling into recession in the next 12 months has risen to 93% from 75% a month ago.  In an attempt to reduce pressure on the banking system the Central Bank has temporarily suspended accounting rules.  The authorities have announced a tax on grain exports to protect domestic stocks.  Good news is that China is likely to continue to buy vast quantities of Russian oil.

U.S. authorities have prevented oil company Rosneft from extending its global influence by blocking its acquisition of a Morgan Stanley oil-trading firm.  The firm has managed to repay part of the bridge loan which matured on the weekend.  The Kremlin has complained that Washington’s attempts to end a 15-year-old deal which protects Russian flat-rolled steel producers from high import duties is inconsistent with World Trade Organization rules.  The government is moving towards requiring the heads of some of the country’s top state-controlled companies to publicly disclose their personal income.

Representatives from NGO the Soldiers’ Mothers of St Petersburg are appealing against their placement on the government’s list of suspicious ‘foreign agents‘.  More than 27,000 people have used a new Facebook page (after the previous one was blocked) to announce plans to attend a rally in support of opposition leader Alexei Navalny.

PHOTO: An ad for Trust Bank in Moscow, featuring Bruce Willis, says, “Trust is just like me, but a bank”. (Reuters/Nikolay Korchekov/Files)