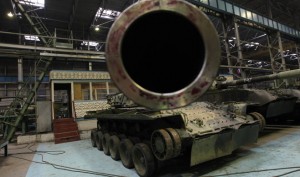 Five rights advocates have reportedly been prevented from leaving Russia to attend a UN-organized World Conference on Indigenous Peoples in New York by the authorities through a variety of ruses – including having pages torn from their passports in Sheremetyevo Airport.  Yukos founder Mikhail Khodorkovsky has said he does not plan to establish a new political party but hopes his Open Russia organisation will stimulate fundamental change.  A plan is afoot among lawmakers to curb Western ownership of Russian media to 20% as opposed to the current level of 50%, a move which would affect leading titles such as Vedomosti.  Russia is planning to increase its Black Sea fleet with more than 80 new warships by 2020; small wonder that production of military equipment is apparently largely responsible for the increase in the country’s industrial production rate.

NATO has remarked that Russia is undertaking a ‘significant‘ withdrawal of its forces from Ukraine and a senior Ukrainian official has also noted that the cease-fire in Eastern Ukraine is being upheld on both sides.  President Putin has warned however that Moscow will restrict access to vital Russian markets if Kiev follows through with a trade agreement with the European Union.  Russia has indicated that it will only support the U.S. airstrikes against the Islamic State in Syria if they come with the consent of the Syrian government.  Japan has taken umbrage at the visit of a senior Russian official to one of the disputed Kuril islands.  Tokyo is also in the process of expanding its sanctions against Russia over Ukraine.

Bloomberg considers how financial ties with China are developing as a result of Western sanctions.  Italian financial police have reportedly frozen $36 million worth of luxury properties belonging to Putin crony Arkady Rotenberg.  French major Total has had to abandon its prospective joint shale venture with Lukoil as a result of strictures.  Apparently only one in five Russians blame rising prices on Western sanctions and retaliatory measures.

PHOTO: Looking down the barrel of a tank in a Tomsk factory. Rising military orders are masking a manufacturing slump. (Denis Abramov / Vedomosti)