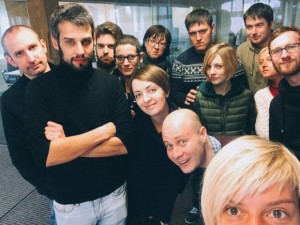 TODAY: Russia says it will recognize this weekend’s elections in Ukraine; may sue France over Mistral; plans for state control of Internet deepen; Russian journalists seek to revitalize news from Latvian base. Rosneft output hits 5 million barrels a day; poll shows Russians increasingly concerned about possibility of financial crisis due to sanctions.

Although Ukraine’s prime minister Arseniy Yatsenyuk is fearful that Russia will attempt to disrupt the parliamentary elections to be held in Ukraine on Sunday, Moscow says it will recognise the elections in the hope that the country will become ‘normal and civilised‘.  Out of the debris left at battle sites, journalists are, the Moscow Times reports, unearthing increasing evidence of Russian participation in the Ukrainian conflict.  Russia has asserted it will file suit against France if the French government refuses to honor a contract on the construction of two Mistral-class helicopter carriers for the Russian Navy.  The Swedish military has called off its headline-grabbing hunt for a supposed Russian submarine.  ‘Europe is facing a challenge from Russia to its very existence‘: the view of a concerned George Soros in the New York Review of Books.  Alexei Navalny rebuffs claims of Putin’s popularity (‘84% means nothing in an authoritarian state‘) in an interview with the AP.  The Kremlin is seeking ways of placing the very roots of the Internet under state control.  Tired of the strictures on journalism imposed by the Kremlin, a group of Russian journalists have decamped to Latvia in a new media operation called the Meduza Project.  City Hall has surprisingly rejected a request to hold the capital’s annual mass nationalist outing, the Russian March.

The Russian Migration Service has asserted that it has no evidence that ex-Ukrainian President Viktor Yanukovych has received Russian citizenship.  Rosneft CEO Igor Sechin has announced his company’s output ‘exceeds the output of many major oil producing countries’ owning ‘about 20% of resources on the World Ocean shelf‘.  Sechin puts the company’s share price at no less than $8.12 per share at possible stake sale by the state.  The imposition of sanctions against the Russian oil industry may lead to the closure of European refineries, he has warned.  A Moscow court has postponed to next week a ruling on a move to seize control of oil company Bashneft from tycoon Vladimir Yevtushenkov.

Over half of Russian citizens have expressed concern that Western economic sanctions could precipitate a financial crisis in the country.  ‘Though Putin’s Russia in 2014 is a vastly different country than Yeltsin’s Russia in 1998, the parallels between the two eras are strong enough to warrant Russians to take heed,‘ says commentator Robert Person.  Fears in the banking world are concentrated at the moment around the prospect of a dollar liquidity crunch.  Andrey Akimov, the mysterious financier who has been instrumental in helping Putin allies line their pockets, is the subject of a piece in Bloomberg.