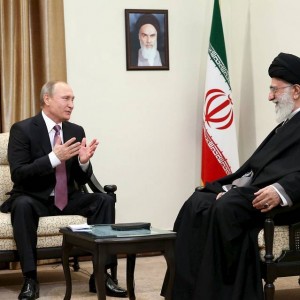 Russia’s defence ministry says an SU-24 fighter jet has been shot down close to Syria’s border with Turkey.  ‘There are numerous discrepancies between Turkish and Russian armed forces’ versions of events so far’ says the Independent: Turkey maintains the jet was warned over airspace violations and was downed by F-16s, Russia has stressed that said the Su-24 was downed by artillery fire whilst over Syrian territory.  The pilots are believed to have ejected to safety.  Russian stocks fell the most worldwide and bonds dropped too on the report.  Following ‘constructive talks’ with Supreme Leader Ayatollah Ali Khamenei, President Vladimir Putin has formally eased an export ban on nuclear equipment and technology to Iran and Moscow has begun supplying Tehran with S-300 anti-missile rocket systems in a commitment to deepening trade ties.  The two sides found common ground on cooperation in Syria and in suspicion of U.S. intentions for the war-torn state and the region as a whole.  The WSJ examines the idea that an Iran-Russian alliance will be tested in the long term by competing energy export goals.  President Putin has signed into law a bill he personally put forward that would exempt holy texts from being branded as extremist.  The Moscow branch of the Church of Scientology will have to cease activities in a new court ruling.

A group of activists accused of flying the Ukrainian national flag from a Stalin-era skyscraper in Moscow to celebrate the two-year anniversary of the Euromaidan protests have been detained in the capital.  Following the weekend’s power blackout in Crimea, which Moscow blames on Ukrainian nationalists, Senator Sergei Tsekov has hinted that retaliatory measures in the form of ceasing coal exports to Ukraine have not been ruled out.  Energy Minister Alexander Novak has also mentioned that possibility, along with indicating that Moscow will cut gas supplies to Ukraine because Kiev has failed to pay in advance.  Could reignited tensions in Crimea precipitate Moscow constructing, with military force, a land bridge to the region?

In the face of increasing harassment by the authorities, Russian NGOs are contemplating the idea of forming a union, provisionally referred to as the Russian Third Sector Union.  The central bank has revoked the licences of four lenders for violating banking regulations.  The IMF believes that Russia can lift some of the ‘forbearance measures’ put into place last year to tackle the collapse of the ruble, as the banking recapitalization program is almost complete.  Gross domestic product fell 3.6% in October compared with a year earlier, an improvement on a 3.8% decline in September.