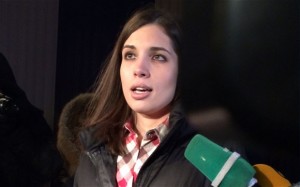 Nadezhda Tolokonnikova of Pussy Riot, who was released yesterday a few hours after fellow activist Maria Alyokhina, has greeted the media with a cry of ‘Russia without Putin‘.  She has joined in the latter’s derision of the prison amnesty, calling it ‘laughable‘.  Amnesty International agrees.  ‘I can’t say whether I feel free or not free, actually, because Russia is a country where whether inside or outside jail, we are prisoners in someway’, Tolokonnikova told reporters, adding that she believes there should be a boycott of the Sochi Olympics.  RFE/RL has an interview with her in which she discusses the penal code, incarceration and the future of Pussy Riot.  Here’s a video interview with Maria Alyokhina who has spoken of the ‘endless humiliations’ of her time in jail.  She has pledged to keep an eye on the situation in the Nizhny Novgorod prison from which she was released and militate for the need to uphold the rights of female prisoners.

The other famous beneficiary of Putin’s Christmas clemency, Mikhail Khodorkovsky, has said he is likely to settle in Switzerland.  He, as well as analyst Gleb Pavolovsky, have indicated that his pardon might suggest defiance against the wishes of siloviki leader Igor Sechin.  There is optimism from Vladimir Ryzhkov about the events: ‘Ten years ago, Khodorkovsky’s arrest changed Russia for the worse. Now his release will change it for the better‘.  This commentator is optimistic that the release will have a (much-needed) needed positive impact on the economy.

Dutch electronics giant Philips is scrutinising its Russian operations as it becomes the first foreign company to be affected by Washington’s Magnitsky Act.  Russia says it will transfer payment for its purchase of $3 billion worth of Ukraine’s Eurobonds today, though Russian First Deputy Prime Minister Igor Shuvalov was quick to assert that the Kremlin can demand that the Ukrainian government repay the loan ‘at any time.’  Moscow has sent 75 vehicles to Syria to assist in the transport of chemical weapons to be destroyed under an international agreement.

Mikhail Kalashnikov, the inventor of the world-famous AK-47 assault rifle has died at the age of 94.  The recently established Kalashnikov Concern however, has no plans of stopping.