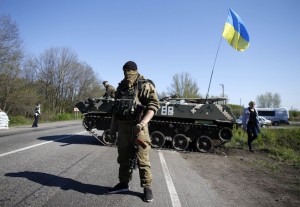 The situation in eastern Ukraine has reportedly deteriorated, after Ukrainian forces killed up to five pro-Moscow fighters in the eastern town of Slavyansk in an operation to recapture the area.  For its part, Russia has launched army drills near the border, prompting fears of invasion.  Kiev has demanded an explanation for the exercises from the Kremlin within the next 48 hours.  Vladimir Putin has argued that if Kiev has deployed its army in Slavyansk, then that is a ‘serious crime‘ against its own people.  Foreign Minister Sergei Lavrov has heartily asserted that Kiev should take the first steps to de-fuse the crisis.  In a broad condemnation of Moscow’s tactics, U.S. Secretary of State John Kerry has accused Russia of using the ‘barrel of a gun and the force of a mob’ in its dealings with Ukraine.  Other Moscow critics include Canadian Foreign Minister John Baird, the Estonian Foreign Ministry and Poland’s Foreign Minister Radoslaw Sikorski.  Moscow might offer the latter a tit-for-tat in the form of a Polish apple import ban.  Germany has suspended $7 million worth of defense equipment exports to Russia as a punitive measure against the Kremlin.

Events in Ukraine have prompted Standard & Poor’s credit agency to cut Russia’s credit rating for the first time in more than five years.  There is evidence that sanctions, discussed in this video, have inspired doubts as to Russian expansion for a number of foreign restaurant chains and retailers.  President Putin has attempted to see the bright side of the curtailments, which the Kremlin elite still claim are an infringement of WTO rules.  The Washington Post wonders how the major American and Western oil companies, heavily invested in Russia, would react to any further sanctions.

A Moscow court has extended opposition leader Alexei Navalny’s house arrest for another six months.  Bolotnaya activist Konstantin Lebedev has been released from jail after concluding a plea bargain, to the apparent chagrin of some of his fellow activists.  At a media forum, President Putin has expressed his belief that the Internet began as a CIA project and that Russian search engine Yandex was subject to Western influence in its inception.  One Internet user worries, ‘if we didn’t have the Internet, I’m sure we’d have had a new Iron Curtain by now’.  Russia’s space agency chief has asserted that it does not need Western space technology and is committed to deepening cooperation with China.

PHOTO: A Ukrainian soldier stands guard in front of an armored personnel carrier at a checkpoint in the village of Malinivka, east of Slovyansk in eastern Ukraine on April 24, 2014. (Marko Djurica / Reuters)