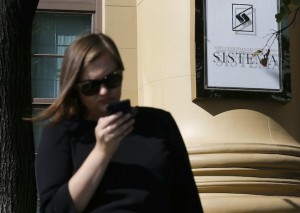 A Moscow court has ruled that Sistema tycoon Vladimir Yevtushenkov must remain under house arrest until at least November 16 in a money laundering case that has been dubbed ‘Yukos 2.0’.  Following the announcement, shares in Sistema fell by 8.8% on the Moscow stock exchange.  The news quashed hopes that he had been released, after reports last week that he had been contacted by telephone.  The Russian General Prosecutor’s office has announced it has filed suit to repatriate Sistema’s shares in oil company Bashneft to the state.  In response to sanctions, a draft law has been submitted to the state duma which would allow courts to seize foreign assets on Russian territory and would permit state compensation for an individual whose property is seized in foreign jurisdictions. ‘History has shown that the Russian government is not shy about seizing energy assets owned by companies deemed to be enemies of the state’.  Metals tycoon Vladimir Potanin explains to Reuters his concerns about the direction Russia is taking.  Read about a group of pro-Kremlin activists in Moscow defying sanctions through fashion here.

A mathematical analysis of the recent regional elections has found that competition at the polls was ‘statistically nonexistent‘.  The Constitutional Court has dismissed a claim by three LGBT activists that the gay propaganda law contravenes the country’s constitution.  Human Rights Watch says the prevention of Russian activists from traveling to a UN conference for indigenous peoples must be investigated.  Activists led by nationalist Eduard Limonov have apparently disrupted a concert by legendary musician and Ukraine sympathiser Andrei Makarevich.  A Norwegian human rights foundation has awarded its annual prize to Russian human rights lawyer Pavel Chikov and his legal aid group Agora.  The state duma continues to tighten Internet regulations, this time with a bill that could facilitate the banning of Facebook and Amazon.

Ukrainian President Petro Poroshenko is apparently certain that with regard to the conflict with Russia, ‘the main, most dangerous part of the war is over‘.  In an interview with the Washington Post, Lithuanian President Dalia Grybauskaite is less sanguine: ‘I think that Russia is terrorizing its neighbors and using terrorist methods.’