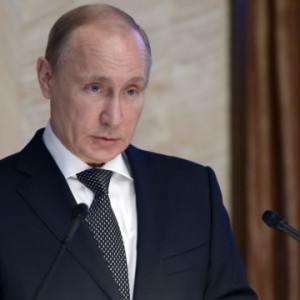 Addressing members of the FSB in his first significant speech since the murder of opposition politician Boris Nemtsov, President Putin has warned that Western powers are already contemplating how to intervene in Russia’s next elections.  He said that despite the efforts of foreign powers to destabilise, malign and isolate Russia ‘the situation around our country will change for the better, but not because we will make concessions, bend down or trifle with someone’.  The President praised the efforts of the counter-intelligence service which he said put a stop to the work of more than 300 foreign intelligence agents on Russian soil last year.  A group of ‘patriots’ have reportedly vandalised the memorial to murdered Kremlin critic Boris Nemtsov, though it has now been restored by supporters.  The Investigative Committee intends to open a criminal case against opposition deputy Ilya Ponomaryov on accusations of embezzlement.  Police are investigating death threats towards Ekho Moskvy journalist Karina Orlova following an on-air discussion about Chechen President Ramzan Kadyrov and the Charlie Hebdo attacks.  A number of lawyers have raised fears about a new draft law which proposes changes to the adversarial system currently employed in the justice system in Russia, as it would undermine the principle of presumed innocence.

Foreign Minister Sergei Lavrov’s four-country tour of Latin America this week has been described as ‘part of a major diplomatic campaign’ to counteract Washington’s attempts to isolate Moscow following events in Ukraine.  In Guatemala, Lavrov warned that Kiev was ‘slowing down’ in its efforts to maintain a ceasefire.  The Kremlin is mulling a retroactive reduction in Ukraine’s natural-gas price once a new agreement has been met between the two sides.

Top lender Sberbank has reported a 20% drop in profit for 2014.  As the economy faces ongoing trouble, Russia is advancing with plans to institute an amnesty on repatriating capital.  The ailing car industry will be boosted by the government’s plans to shell out $190 million on new vehicles for the state.  Ailing Russian consumers are facing the prospect of paying up to 20% more for their medicine this year as a result of the fall in the ruble.  In an atypical defence of media freedom, Senator Konstantin Dobrynin has decried the decision of a federal watchdog to force a news outlet to suppress a story about cancer patients committing suicide, saying ‘covering up such information could lead to even more victims’.

PHOTO: President Putin addressing the FSB on Thursday, March 26, 2015. He vowed Russia would stand firm in its relations with the West. (Kremlin.ru)