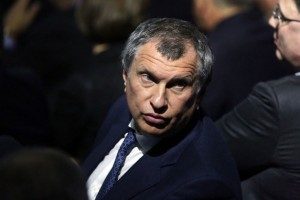 The U.S. has named seven high-ranking individuals, among them Rosneft chief Igor Sechin, whom it has added to its sanctions list.  First Deputy Chief of Staff Vyacheslav Volodin and Deputy Prime Minister Dmitry Kozak are among those targeted: RFE/RL has an overview of the names. The European Union has also added 15 individuals to its asset freeze list, among them Kozak, along with armed forces chief Valery Gerasimov and deputy chairman of the Duma, Ludmila Shvetsova.  Japan has imposed visa bans on 23 people.  Mobile operator MTS is concerned about the effect of sanctions as is gas giant Gazprom.  In the wake of the restrictions, Statoil has delayed a drilling campaign with Rosneft.  Exxon Mobil might also have a problem, since it is knee-deep in Arctic cooperation with the Russian oil monolith.  Sanctions are unlikely to be effective unless ‘they inflict enough pain on the oligarchs who support his regime that they tell him it’s not worth it‘ argues one analyst on Bloomberg.  Will they simply stimulate an escalation of this crisis?  Russian Defense Minister Sergei Shoigu has reportedly assured U.S. Defense Secretary Chuck Hagel that Russia will not invade Ukraine.  Andrei Tsygankov argues that the West should look to solutions from Kiev as opposed to hoping for a change in tack from Putin.  Gunvor founder Gennady Timchenko, on whom Washington has already imposed sanctions, has been appointed to lead the Russian section of the interstate Russian-Chinese Business Council.

The mayor of the Ukrainian city of Kharkiv has been shot as pro-Russia militia men seize more government buildings in the city. Several people have been wounded in clashes in Donetsk.  Moscow has voiced concern over an ‘unprecedented‘ increase in U.S. and NATO military activity near Russian borders.  President Putin has asserted that Russia will be able to replace any defense industry imports lost due to the Ukraine crisis with its own products.

The fraud case against Alexei Navalny launched by Yves Rocher has been returned to prosecutors after the defense indicated that it contained ‘numerous violations‘.  According to security analysts, the Kremlin is making quick work of reaching almost total control of Russia’s Internet.  The Moscow Times offers a disturbing insight into homophobia in St Petersburg.

PHOTO: Rosneft Chief Executive Officer Igor Sechin was Russian President Vladimir Putin’s colleague at the St. Petersburg mayor’s office before rising to become the head of state-run OAO Rosneft, which over the past decade he built into the world’s largest publicly traded oil company by output and reserves. (Andrey Rudakov/Bloomberg)