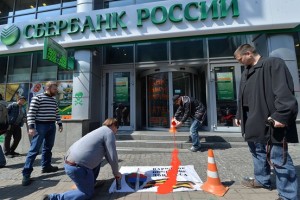 Russia has announced a ban on most fruit and vegetable imports from Poland, along with Ukrainian juice, and said it may extend the restrictions to the rest of the European Union, in apparent retaliation for sanctions it has called ‘destructive and short-sighted‘.  The Foreign Ministry has said that measures against it by the EU indicate a ‘lack of political will‘ to reach a solution on Ukraine.  Whilst symbolically sanctions are punitive, ‘immediate impact is likely to be relatively muted‘ argues the WSJ, although VTB’s share prices have taken a major hit.  Russia’s central bank has pledged it is on hand to help out its lenders. With regards to the EU sanctions, ‘great care has been taken to avoid damaging the energy industry‘, notes the Moscow Times.  Rosneft, however, seems to have some cause for concern.  Norway, which exports oil and gas technology to Russia, has stated it will also participate in sanctions.  The Independent reports that Germany and Russia have been working on a secret plan to broker a peaceful solution to the Ukraine crisis, which would, controversially, involve the international community recognising Crimea’s independence.

Deputy Prime Minister Dmitry Rogozin has argued that U.S. sanctions indicate fear on Washington’s part and has asserted that Russia can build its own Mistral warships should France renege on a 2011 deal.  He’ll doubtless be pleased to hear reports that Nato is ‘ill-prepared‘ to confront new threats posed by Russia should the situation escalate.  Far East Development Minister Alexander Galushka believes that sanctions have highlighted the importance of improving the economic climate in its far-eastern territories.  There are, it seems, some voices in the West who suggest that the MH17 incident is being exploited to punish Russia unfairly.  Moscow has said called recent accusations by the United States that Russia violated the Intermediate-Range Nuclear Treaty ‘unfounded‘ and ‘as baseless as all of Washington’s claims’.

Extradition proceedings have been launched in Italy against Oleg Vorotnikov, the leader of incendiary anti-Putin Russian art collective Voina, after an apparent dispute with Italian anarchists.

PHOTO: Activists demonstrate outside a Sberbank branch in Kiev. Sberbank, Russia’s largest bank, doesn’t appear on the U.S. sanctions list despite being majority-owned by the Russian government.  (Agence France-Presse/Getty Images)