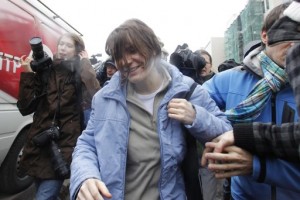 The Guardian has video and translations of portions of the statements read out by Pussy Riot members Maria Alyokhina and Nadezhda Tolokonnikova during their appeal hearing.  The third imprisoned member, Yekaterina Samutsevich, was released and given a suspended sentence, whilst the other two will remain in prison to finish serving their two-year terms.  All three apologised for offending religious Russians, and reiterated that the aim of their protest was to object to Vladimir Putin’s authoritarian rule, and the merging of state and religious power.

Tolokonnikova, over loud objections from the judge, warned that Putin was leading the country to civil war.

“I want to warn that everything that is happening in Putin’s third term is leading to the end of stability,” she said. “In two years there will be civil war, because Putin is doing everything to ensure that.” The judge did not let her finish.

“I have lost all hope in the court,” Alyokhina added. “I want again, and probably for the last time as I won’t have any more chances, to talk about our motives.”

“I call on all believers to listen to us, because, dear believers, we didn’t want to offend you,” she said, staring down a video camera placed in the jury box recording the proceedings. “We went into the cathedral to issue a protest against the fusion of the spiritual and political elite of our country.”

In an interview aired last weekend, Putin came out in support of the women’s arrest and sentencing, and showed disgust at what he called their “indecent” name. Alyokhina responded by quoting the president and his spokesman: “That is no more indecent than your Vladimir Vladimirovich [Putin]’s statements about ‘wasting our enemies in the shithouse’ or ‘smearing the livers of protesters on the pavement’.” Supporters outside the courtroom cheered at her statement.

A brief video of the trial can be found here.