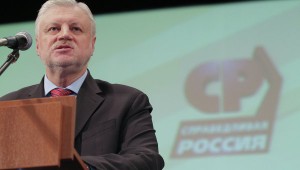 A Just Russia has played an interesting role in Russia’s shifting political landscape, buffeted by the winds of the protest movement. One of the stalwarts of the ‘managed opposition’, which many believed is designed to tow the Kremlin line, the party has also produced some firebrand oppositionists in recent times, such as Astrakhan’s famed hunger striker Oleg Shein or the embattled Gudkovs. Now it seems that the wheels may be falling off the wagon with the weight of disagreement, as factions begin to veer in irreconcilable directions.

On the weekend leader Sergei Mironov expressed his discontent with party members indulging in the white ribbon movement and it was announced yesterday that two founding groups are leaving on the basis of the increasing tendentiousness of the party’s ideological links.  This comment piece from ITAR-TASS exmaines why this is happening – and on whose command:

Experts say that all these events – another attack against A Just Russia, the latter’s refusal to cooperate with the radical Opposition, and the split inside the A Just Russia faction in the State Duma – are certainly related with each other.

A source close to the Kremlin has told Nezavisimaya Gazeta that in this way A Just Russia is being returned to the mission for which the party was created six years ago – splitting the Communist electorate and converting a certain part of it into potential supporters of a second, alternative ruling party.

As a source close to the presidential staff has told the daily, A Just Russia “followed an incomprehensible policy for a whole year and now a campaign to correct mistakes is in progress inside the party.” If A Just Russia confesses its mistakes, then it will be able to stay in politics further on.

The divorce with Rodina and the Pensioners’ Party is part and parcel of the campaign against A Just Russia in retaliation for its support for street protests, Kommersant quotes political scientist Mikhail Vinogradov as saying. “It is very strange the pressures are continuing. Mironov has already distanced himself from the street Opposition. A Just Russia will be drifting ever farther away from the protesters, and then, possibility, it will be forgiven.”