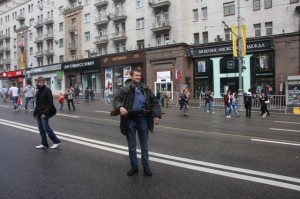 One of the main issues noted by the protestors who have faced the wrath of the OMON in recent days in Moscow, is the fact that an act of simple accessorizing can be enough to prompt a detention, if the accessory in question is white and ribbon-shaped.  The tactic of preemptive dispersal used by police is highlighted by RFE/RL’s Russian Service reporter Yelena Vlasenk when interviewing the speaker of the Moscow City Duma, Vladimir Platonov.  ‘I personally saw, as did many human rights activists, how OMON troops seized people simply for sitting or standing on the street, doing nothing illegal.’  She goes on to comment, ‘It’s become dangerous to even walk through these streets, because you risk being detained for nothing’.   In an attempt to demonstrate how dangerous walking the streets of Moscow has become, activist Pavel Tarasov has made a photo report of how he managed to perambulate the capital, and even make a rest-stop in Mcdonalds, without any interference from the police, all the while bearing a replica AK-47.  LiveJournal user Tsybankov introduces this brilliant testament to the follies of Moscow policing directives in the Other Russia:

Everyone knows what insanity is going on in our capital, now already for the fourth day in a row. People are arrested for having any type of opposition symbols. For instance, my friends were taken to a police station on May 7 just because they were walking around the city with white and red ribbons.

So consider this: my good friend Pavel Tarasov was walking around the city on May 9 with a lifelike model of an AK-74. He walked from Lubyanka to Pushkin Square past the State Duma, past Manezh, along Tverskaya, past the mayor’s office, along Pushkinskaya. And not a single cop stopped him!!!! Not one! To see this happen was amusing and terrifying. If I’d had a white ribbon, I would’ve been detained after going 10 meters. But a man hanging out with an AK doesn’t stand out to anyone. The police officers just looked at him and then looked away to the side.

I would like to ask what it is that our police actually does? Detain students and beat women? Or does it protect public order? At the end of the day, the work of the police gets a greasy, solid F for effort. Not even a D. They haven’t earned it. And they get an F for arresting people walking around with white ribbons, since they’re obviously looking to blow up the Kremlin.

And moreover, in this case it was just harmless Pasha, but what if it was an ill psychiatric patient or a terrorist?

See all the photos from Tarasov’s experiment here.