As The Hammer Falls 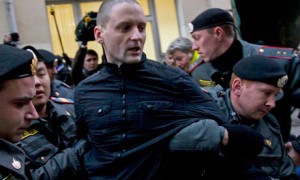 As Russia’s Investigative Committee opened up a new criminal probe this week against Left Front leader Sergei Udaltsov and his lieutenant Konstantin Lebedev, it appears that the state is finally beginning to turn the corner toward a more overt expression of authoritarianism.

Udaltsov, whose fiery brand of politics may not always sit very well with Westerners, enjoys a broad and growing grassroots support base, and has proven capable of delivering considerable numbers to the streets – despite the overwhelming disincentives by the state to stay at home.  The charge being prepared against him for “organizing mass disorder” is characteristically flimsy and even darkly humorous.  In fact, the criminal probe was inspired by nothing short of a propaganda film – “Anatomy of a Protest 2” – aired by the state-owned NTV, just in case there were any lingering doubts over whether or not this were a political frame up.

Udaltsov’s brief detention for questioning and the new probe comes just a couple weeks after the feminist punk rock group Pussy Riot held their appeal hearing to challenge the two-year sentences for the now infamous performance in Cathedral of Christ the Savior.  After one member, Yeketerina Samutsevich, fired her politically combative lawyer and hired counsel that was willing to play along with the court, she was able to secure her release while the two others will sit in jail, setting off fervent debate over the court’s motives, the opposition’s strategy, and the nature of the state’s tolerance for protest.

An interesting argument over the meaning of Samutsevich’s release is offered by the American blogger Kevin Rothrock, who points out that Samutsevich was granted clemency by the state because her lawyer argued that technically she was not one of the individuals who actually danced and performed in the Church.  As such, her release appeared to indicate that the court was not jailing them over the anti-Putin lyrical content of the performance, but rather the hooliganism of performing in the Church.   “Driving a wedge between Pussy Riot’s supporters and sympathizers is just one facet of yesterday’s court decision. Samutsevich’s release also signals that the state will respond varyingly to various types of protest. Less disruptive behavior, it turns out, will be punished less,” Rothrock writes.

It’s interesting to view the state’s handling of Udaltsov’s case this context, especially since it is Konstantin Lebedev, not Udaltsov, who is still being held in jail and may face a 10-year sentence for allegedly plotting protests to “overthrow” the Russian government.  Just for fun, NTV concocted an elaborate conspiracy theory even involving Georgian officials experienced with color revolutions (which to me is quite disappointing – that’s so 2004).

Whether or not the Russian authorities are attempting a more “proportional” strategy to manage public discontent, it is clear that they have increased the tempo of repression, opening up a full-on war against their critics during a moment of particularly acute weakness.  United Russia swept last week’s regional gubernatorial elections with low turnout (11%) and “filtering” of candidates.  The opposition has been mired in the Coordination Council election process, which is noble in intent but has re-surfaced some of the worst tendencies of personality-driven politics over issues-based movement.  Numbers of political prisoners and bogus prosecutions are on the rise – now just about anybody can experience the legal nihilism usually reserved for Mikhail Khodorkovsky.  Meanwhile over the course of the year the institutional environment protecting civil rights in Russia has rapidly eroded, with draconian NGO legislation, criminalization of libel, and the preparation of legal grounds to censor the internet in the very near future.

There have been repeated arguments on this blog and elsewhere that analysis of these kinds of events should avoid the flawed assumption of a unitary executive. Instead of one power vertical planning these measures in a coordinated fashion, we have a number of moving parts improvising responses.

As Prof. Mark Galeotti argues, “we ought not to bundle all these measures into a coherent whole – that is too much like seeing a series of dots and insisting on drawing a picture from them. The Gudkov affair was, I think, initiated by elements within the Duma rather than originally dreamt up in the Kremlin. Bastrykin has been empire-building since the SK was formed, and while the emergence of the opposition movement helped him push for new powers, he is likely now to be reined in somewhat.”

The lack of coordination behind the Kremlin’s quickening crackdown on opposition only makes things messier, making one pine for the days of Vladislav Surkov’s elegant touch.  But now Surkov has been cast out to spend his days hanging with Mark Zuckerberg and fondly remembering Russia’s rhetorical flirtation with liberalization.  Just this week, Putin fired Medvedev’s Regional Development Minister Oleg Govorun, while more positions are expected to be rotated soon.  As Galeotti points out, the loss of Kudrin, Surkov, and Medvedev have altered the face of the regime, and may reduce its effectiveness in certain policy areas.

Taken altogether, the regime’s mask is beginning to slip off, as we see Putin beginning to place less and less importance on appearance and tokens of legitimacy.  As an example of the prevailing attitude, Putin this week fired off a hostile message, thundering with “nobody can use any pretext to dictate to Russia on how it should trade and with whom,” shortly following a diplomatic scandal with Turkey over the alleged shipment of arms to war-torn Syria.

But of course, this is right in Putin’s wheelhouse, portraying himself and the country as a besieged fortress.  This is also why, contrary to popular belief, the Pussy Riot incident transformed from a problem to the regime to an opportunity.  Jailing these three girls was politically successful for Putin, reinvigorating his popular support among Russia’s religious conservatives while at the same time dividing the opposition.  As for the reputation hit outside of Russia, Putin seems to care less and less.  Although he recently bought a £15 million mansion in Spain, it seems unlikely he will ever be able to spend any time there.  A man who has ruled for this long and stolen this much does not have the luxury of very many retirement hiding places.

Lev Gudkov of Levada Center also tells the FT that because more of the urban middle class is joining the opposition, Putin is beginning to look to the more conservative and rural supporters, which reinforces the pariah mentality.  “This is the public relations model known as ‘fortress under siege’,” Gudkov says, “and it seems to be working for the time being. People do respond to the imperial rhetoric”.

It wasn’t always this way.  Even at the heights of the Khodorkovsky trials, the murders of Politkovskaya-Estemirova-Magnitsky etc., or even the aftermaths of horrific tragedies like Nord Ost and Beslan, there was an emphasis on a pretext of legality – that the state still had rules and institutions and operated under these rules and institutions, even if the targets and outcomes were sometimes arbitrarily and politically determined.  It may have been twisted logic, but there was the idea of logic.  Opening up a formal campaign of persecution against Udaltsov and other protest leaders begins the process of broadening the machinery of repression to a much wider audience, with far fewer formal rules that would allegedly “protect” a person or allow them the comfort of a predictable oppression.  It’s no longer impossible for people to imagine their own victimhood under such a system.

It’s difficult to remember any other time in the past few years when the grip of the state has been so strong while the opposition so scattered and weak.  But the new strategy being pursued by the authorities has a fair possibility of backfiring, especially if real social grievances begin to take root in the regions, as the state struggles to deliver on its considerable spending promises.  Of course widespread discontent is not a reality in the near term, and the individualistic mentality of the largest portion of the Russian population will be resistant to collective action until the pain becomes too acute – but when that does happen, the state has already gotten itself into a very difficult corner with few options.