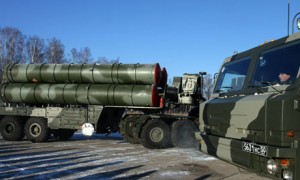 Since Russia vetoed the UN sanctions on Syria, prompting an angry Hillary Clinton to accuse Moscow of standing on the ‘wrong side of history’, many assumed that the decision stemmed principally from the lucrative arms trade it enjoys with Al-Assad regime.  Today the spotlight has been put on Russia’s relationship with fellow resolution vetoer, China, as it was revealed that a Chinese national was arrested just under a year ago for allegedly attempting to pilfer sensitive information relating to military technology.  With Putin on the point of an official visit to Beijing, the timing seems provocative, to say the least.  The Guardian considers how the arms trade between these two powers is at the heart of a fragile and shifting relationship:

A report by the Stockholm International Peace Research Institute (Sipri) released this week warned that the Sino-Russian relationship was growing increasingly uneasy given China’s international rise.

“In the coming years, while relations will remain close at the diplomatic level, the two cornerstones of the partnership over the past two decades – military and energy co-operation – are crumbling,” the thinktank wrote. “As a result, Russia’s significance to China will continue to diminish.”

It said that while more than 90% of China’s major conventional weapons imports came from Russia between 1991 and 2010, the volume of imports had declined dramatically in the last five years.

In part, that reflected the development of its own arms industry and the fact that Russia could not meet some of the new demands of the People’s Liberation Army as it developed, said Dr Paul Holtom, director of the Sipri arms transfers programme and one of the report’s authors.

But it also reflected Russia’s diversified customer base, which allowed it to take a tougher negotiating stance with China, particularly given anxiety about how China would use its purchases.

“Russia is unwilling to provide China with advanced weapons and technology, primarily because it is concerned that China will copy Russian technology and compete with Russia on the international arms market,” said Holtom.

“The nature of the arms transfer relationship will increasingly be characterised by competition rather than co-operation.”

Maintenance and upgrades accounted for perhaps 10% of Russian arms transfers, meaning that Russians do not want to share related documents, he said.

But China also has concerns that some of the technology it is buying is not always up to scratch.

No one at the foreign ministry in Beijing could be reached for comment.