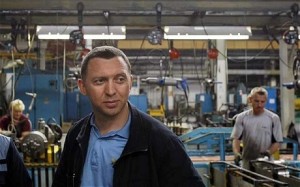 With the media awash with talk of swelling opposition and bourgeois discontent, Russia’s ruling elite may be grateful for any form of distraction to see them into the new year.  A glimmer of positivity came today in the form of Oleg Deripaska singing the praises of the Russian economy, citing the country’s entry into the WTO as a salient advantage.  The Rusal tycoon told the Telegraph that:

‘For the West it is very important. It is a commercial agreement, it is dispute resolution, it is the acceptance of a lot of standardised procedures, which helps to reduce barriers on trade,” he said.

“If you are reasonable it will help you to add a positive score to Russia. It is one step for Russia to become a market economy and to become more integrated in the global economy. Russian industry is not so diversified and is not very competitive, this is a challenge for us. It will raise the level of competition tremendously.

“If you try and have a court decision somewhere in China, it is impossible. In India there is so much procedure, you can die in the process. Russia is not brilliant but you can get justice in commercial courts.’

Others would beg to differ. A sharp rebutall comes from Forbes writer and scandium expert Tim Worstall, who finds cause for disagreement from his own personal experiences which lead him to conclude ‘[t]he place simply doesn’t work any more as a business environment.’  He expands:

To give you an example, we cannot even get paid for, legal, export tax paid and paperwork completed materials out of the country at the moment without variable delays of weeks to months. Materials sitting in the customs offices of international airports are subject to, as I say months, of equivocations and delays. That’s just not how the western business world likes its critical supplies. So we’re leaving. Despite the country having the world’s expertise in our particular materials, an excellent relationship with those experts, despite better prices and better goods than other possible sources, we’re off to where we can be sure of what the morrow will bring.