Vladimir Putin’s New York Times article is an excellent piece of diplomatic rhetoric that will no doubt tug the heartstrings of many of us around the world who are sick of bloody diplomacy.  Here’s a snippet:

From the outset, Russia has advocated peaceful dialogue enabling Syrians to develop a compromise plan for their own future. We are not protecting the Syrian government, but international law. We need to use the United Nations Security Council and believe that preserving law and order in today’s complex and turbulent world is one of the few ways to keep international relations from sliding into chaos. The law is still the law, and we must follow it whether we like it or not. Under current international law, force is permitted only in self-defense or by the decision of the Security Council. Anything else is unacceptable under the United Nations Charter and would constitute an act of aggression.

Putin has the luxury – and great advantage – of being able to take the high road on Syria, giving him the upper hand over President Barack Obama, and winning him points with U.S. liberals, for whom military action is hugely unpopular.  And in the article, Putin correctly lists all of the reasons why, on a human level, a strike would be disastrous – more bloodshed, higher risk of terrorism, more highly trained terrorists, and the risk of Syria falling into the hands of extremists.  In reality, Putin’s position has nothing to do with the human level, and everything to do with the economic.  Russia needs to maintain naval access to Syria’s Mediterranean port of Tartus; and it has a significant arms customer in Syria; Leonid Bershidsky has also pointed out that the destruction of chemical weapons is a lucrative business, and that Russia would be the main contender for the job.  But Putin also needs to consider his international image and the image of Russia – he is widely seen as a prideful leader, eager to carve out a reputation for Russia that is entirely its own; cleaving to a U.N. majority does not fall in with this.

It should also be noted that Russia often does not have to use force to get what it wants, due to the fact that it is an energy superpower and an import giant, holding all of the cards in the region.  In the very same week that Putin’s piece was published, various European Union officials slammed Russia for exerting financial pressure and issuing trade threats to Moldova and Ukraine in a bid to prevent them from teaming up with Europe on free trade agreements.  Russia’s version of war is much less bloody than the U.S.’s because it oppresses those it wants to influence on other levels.

Russia’s bloodiest wars are reserved for those within its own borders.  Putin comments in his op-ed that ‘the law is still the law, and we must follow it whether we like it or not.’  But what about those for whom the law brought them into opposition with the Kremlin’s interests?  Sergei Magnitsky, Anna Politkovskaya, Boris Berezovsky, the Bolotnaya Square protesters, Alexei Navalny – where is the generous diplomacy for them?

This meme sums up all the contradictions pretty succinctly: 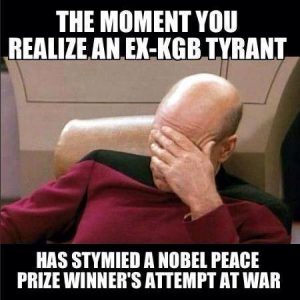