Does Russia Really Want to Own Europe? 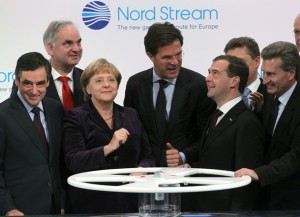 It’s hardly a secret that the past decade of Russian foreign policy has been focused intensely on increasing its political influence in Europe, whether through pipelines, exploration deals, ownership of infrastructure assets, or massive procurement contracts.  Not many people would dispute their success either – just a cursory review of business deals their accompanying political proxies with France, Germany, and Italy, and you already have the realization of what Janusz Bugajski called “pragmatic reimperialization.”

It’s no small irony that as right as Europe is looking hat in hat toward Russia for a bailout, the long-awaited Nord Stream gas pipeline goes online today. The controversial $10 billion pipeline—a joint venture with Germany designed to bypass transit countries like Ukraine and Belarus and rewrite the EU-Russia energy relationship—is as fraught with geopolitical and economic concerns, as a buffer zone is created in Eastern Europe which may come to define how energy dependence can impact political sovereignty.

For all the talk about how Nord Stream will give Moscow more leverage over Minsk and Kyiv “by shifting the…impact [of lost revenue] back and forth between the two countries according to the Kremlin’s political aims”, there is also the very real question of whether Europe will soon be beholden to Moscow in exactly the same way. Already, Russian energy giant Gazprom dominates the Balkan energy market to such an extent that some countries are 100 percent dependent on a Russian supply. Taken alongside Putin’s upcoming third term, his stated vision to head up the formation of a “Eurasian Union,” and the relatively unquestioned claim to a privileged sphere of influences, there remains contested debate over what form this integration will take.

Interestingly, the same sum that was required to build Nord Stream – $10 billion – is rumored to be Russia’s eventual contribution to an International Monetary Fund “funnel” account to help bail out the European Union. In return, Russia wants more voting clout and financial power in the organization, but certainly there will be a number of unstated expectations and concessions as Moscow moves forward with its continental integration project.

Last month, for example, the European Commission raided natural gas companies in central and eastern Europe, including units belonging to Gazprom, on suspicion of having violated EU competition laws. As the Wall Street Journal reported, “The commission said the raids weren’t aimed directly at Gazprom, but Russian officials say they view them as hostile to Russian interests. Prime Minister Vladimir Putin said he will be closely following the progress of the antitrust probe against the Russian gas giant.”

It would be hard to imagine the regulators enforcing the same rules after Russia kindly picks up $10 billion of your debt, much less when they are supplying a projected 40% of your gas.

However, at the end of the day, one wonders whether Russia’s foreign policy strategy has reached its limit.  Although it depends on your outlook on the severity of the European debt crisis – and we think it is very severe – Moscow shouldn’t feel compelled to buy a lemon just because it comes with a warranty.  They might find out that owning Europe isn’t all that it’s cracked up to be…