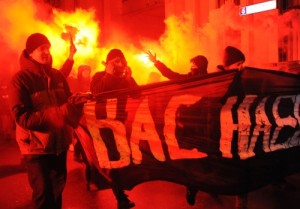 PROTESTS: United Russia has lost its majority, garnering just 49% of the vote in Sunday’s elections – a 15% loss in support, and an overall loss of 77 seats.  The elections have been mired in protests against widespread and myriad violations of electoral process, with several thousand people marching in Moscow tonight to chants of ‘Russia Without Putin’. Thousands have also marched in St Petersburg.  On election day itself, around 30 activists were detained by police officers at Red Square, and another 100-200 were taken from Triumfalnaya Square, amid chants of ‘Limonov for President!’ and ‘Give us back our elections!’  Pro-United Russia Nashi demonstrators were reportedly left alone. but Left Front leader Sergei Udaltsov was arrested before he could even make it to the protests.

VIOLATIONS: A series of denial-of-service attacks were made on liberal media outlets that attempted to broadcast live information about election violations, including Ekho Moskvy, Kommersant, the New Times, LiveJournal and the website of Golos.  In addition to United Russia’s pre-election bribery and intimidation of voters, yesterday’s violations are thought to have included pro-United Russia campaigns held outside polling stations, buying votes, fake registrations, and ‘carousel voting’, where busloads of voters travel to various stations to cast their votes a number of times.  Natalya Rakhimova, an observer monitoring a polling station in Bashkortostan, says she was forcibly evicted from the premises on grounds that her badge was ‘too big’, after she started complaining about violations. Many others were prevented from taking pictures at polling stations, and one source reports monitors having their cameras broken.  Golos also said that many of its observers were banned from polling stations, and its leader was detained on Friday night and held until she had given up her laptop for inspection; a BBC reporter was detained at a polling station and forced to show his footage to the police.  Golos has published its list of violations on Google Docs.

The OSCE is reporting ‘numerous violations’, and U.S. Secretary of State Hillary Clinton has spoken out against the results, calling for an investigation into reports of electoral fraud.

PHOTO: Anarchists burn flares, shout and carry a banner in central Moscow, late on December 4, 2011, during their protest against the conduct of Russia’s parliamentary elections. Photo courtesy: AFP