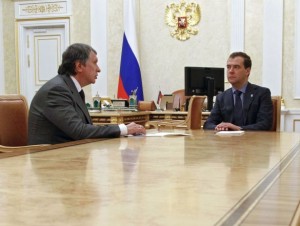 The Kremlin’s anointed energy tsar, close Putin ally and siloviki overlord Igor Sechin, who will not serve in the new cabinet, has apparently had his loyalty to the regime rewarded with the directorship of Rosneft.  This was a role he once enjoyed, but had removed from his clutches in 2011 when then President Medvedev ordered politicians to step down from boards of companies.

In the numerous analyses of the new cabinet, which was unveiled yesterday, some observers highlighted the fact that Sechin’s replacement within the cabinet, Arkady Dvorkovich, belongs to Medvedev’s rival brigade of technocrats, and suggest that this may stoke division between the groups.  But as many observers point out, Sechin’s actual job description matters little, whether inside the cabinet or outside.  His power within the Putin regime is, for the moment, as gloomily inevitable as death and taxes.  From the Moscow Times:

Others dismissed the significance of the appointment because Sechin will exert extensive power wherever he is placed.

“Exactly which post Sechin occupies is a matter of secondary importance,” said Andrei Piontkovsky, of the National Academy of Sciences’ Institute for Systems Analysis.

And there has been skepticism about whether Dvorkovich, who is designated with overseeing the energy sector in Medvedev’s government without a ministry of his own, has enough administrative resources or political experience to enforce his will.

“We don’t see any strong counterweights to Sechin in the government,” said Alexei Makarkin, an analyst with the Center for Political Technologies.