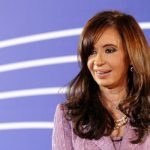 The international energy sector is reeling from the news announced yesterday by Argentina’s fiery president Cristina Kirchner that she plans to renationalize some of the country’s energy assets – namely 51% of YPF, owned by a now-enraged Spain. Foreign Policy’s Joshua E. Keating has a wonderfully sardonic take on this, a five step guide for aspiring dictators wishing to achieve similar objectives.  Step 4a draws on the work of the master.  It is simply entitled ‘The Putin Method’:

Another, often cheaper, method of nationalization is to build a criminal case against the management team of an oil company and take it apart, bit by bit. In the case of the Kremlin’s prosecution of former Yukos CEO Mikhail Khodorkovsky, this had the added benefit of removing a troublesome political rival. Yukos had been the first fully privatized Russian oil company of the post-Soviet era. But following a number of disputes between Khodorkovsky and the Kremlin — over state control of the pipeline industry, the planned sale of big shares to American oil companies, as well as his own political ambitions — he was arrested and charged with tax evasion in 2003.Over the next two years, Yukos was ordered to pay billions of dollars in back taxes and forced into bankruptcy. The last of its assets were seized in 2005 and eventually acquired indirectly by state energy monopoly Gazprom.