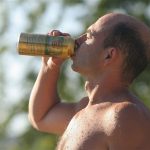 Much attention this week has been focused on President Medvedev’s new law on beer. Prior to its previous incarnation as a foodstuff, beer has now officially become alcohol.  As a result it will disappear from kiosks, airports and railways stations where it has traditionally been found alongside soft drinks and snacks. As of now, one will no longer be able to buy the beverage 11pm and 8 am. As for those caught selling the alcohol to minors, they could end up facing a prison sentence.  Many will remember how perilous restricting alcohol consumption is in a nation of inveterate tipplers.  Gorbachev tried to institute a partial prohibition between 1985 and 1987 and monumentally failed.  His anti-alcohol campaign earned him not only the title of ‘mineral-water-drinking secretary’ rather than ‘General Secretary’ but also the virulent disapprobation of the population. It also spurred the production of mephitic moonshine, which remains an issue of deep concern today.  RFE/RL has some of the facts and figures which reiterate just how alcohol-dependent the Russian nation is, and why the new measures will do little to change this:

According to a 2009 study published in the British medical journal “The Lancet,” alcohol abuse accounts for 600,000 deaths in Russia each year and a total of half of all deaths among males between 15 and 54.

Beer has been steadily growing in popularity since the collapse of the Soviet Union. The new law has been enough to bruise the share price of Danish brewer Carlsberg, which owns Baltika, Russia’s largest beer producer, and gets about 45 percent of its profits from Russia.

But many are skeptical that the new regulations will bring significant change, at least in the short term. Vadim Drobiz is the director of the Moscow-based Center for the Study of the Federal and Regional Alcohol Markets. He is sanguine about the changes.

“[The consumer] won’t lose anything at all,” he says. “He won’t reduce his level of consumption. He will buy his beer in advance. Night-time crime is falling and will continue to fall to some extent.”

He notes that consumption of hard liquor did not drop appreciably when a ban on nighttime sales was introduced at the end of last year.