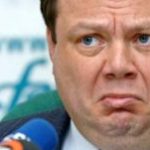 Yesterday’s big news was the shock departure of oligarch Mikhail Fridman from the board of joint venture TNK-BP.  The partnership has been on the rocks for some time, principally due to the AAR consortium’s decision to block BP’s Arctic deal with Rosneft last year, which prompted a storm of conflict.  Analysts have spoken of Fridman’s resignation as the culminaton of the loss of trust between the two sides, and that it signifies the desire, on the consortium’s part, to reconstruct the nature of the partnership.  The FT points out that along side this, there are other matters to consider, namely the return of eminence grise Igor Sechin to the helm of Rosneft:

However, there are other explanations for Alfa’s sudden move. Some think it could herald a new state carve-up, as Igor Sechin, Russia’s energy tsar, prepares to make a move against the company. The thinking is that Mr Sechin could use Rosneftegaz, the state investment vehicle, to acquire AAR’s stake in TNK-BP.

That would be sweet revenge for Mr Sechin, whose reputation was damaged last year when the Arctic alliance he engineered between BP and Rosneft collapsed over AAR’s objections.

“It looks like [Alfa] are being elbowed out, and they are likely to sell it to the Rosneftegaz umbrella,” says the industry expert.  That could make sense in the context of the steady increase in bureaucratic pressure on TNK-BP over the past six months.

The company has suffered delays in winning government permits: and in April the then-natural resources minister Yury Trutnev ordered charges to be brought against the group over oil spills in Siberia.

It was not clear on Monday whether Sergei Donskoi, the new natural resources minister, still intends to press ahead with the charges. However, another industry insider says the threat appears to bear all the hallmarks of a Sechin counterattack. “It looks like Alfa is trying to run away,” he says.