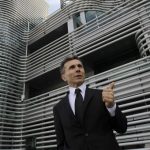 This morning reports came in of Georgian billionaire and opposition agitator Bidzina Ivanishvili lamenting that President Mikheil Saakashvili’s apparent secession on political objectives to Russia joining the WTO, is an act of political cowardice, little more than a craven submission to international pressure. Below is an extract from an analysis by the FT’s Isabel Gorst, who attempts to pinpoint what has prompted the turnaround from Tbilisi, which, up until now, has vociferously defended its right to veto Russian accession to the free trade group:

First, the publicity has helped to remind the world of Georgia’s claims to Abkhazia and South Ossetia, the two breakaway territories now guarded by Moscow’s soldiery. Very few countries have followed Russia in recognising Abkahzian and South Ossetian independence but they have mostly kept quiet about challenging the situation on the ground. A bit of WTO-linked diplomacy puts the matter back on the international table – albeit indirectly.

Moscow is now considering a Georgian proposal for international monitors to do the job. That’s not as good from Tbilisi’s viewpoint, as asserting its territorial right by posting its own officials – but it’s a good second best as it highlights that these frontiers are disputed, or, at the very least, constitute a special case.

Next,  Georgian president Mikheil Saakashvili saw even some of his supporters in the west brand him a hot-head over his behaviour in the run-up to the war. A touch of flexibility today may win back a few friends in Washington and Brussels.

Both the US and the European Union have recognised, de facto, that Russia has re-asserted its influence in the former Soviet Union. And they aren’t ready to do much about it,  given the globe’s manifold economic and political challenges.
Georgia says it has not come under pressure from the US to approve Russia’s WTO bid. However, it is not impossible the US could find a way of rewarding Georgia if the WTO deal goes through.

Once inside the WTO, Russia will have to observe civilized trading rules that make it difficult for members to bully each other. Russia will almost certainly have to scrap the ban Moscow health inspectors slapped on Georgian wine and mineral water in 2006 that blew a hole in Georgia’s beverage exports. It might becoome harder to impose such restrictions in future, though certainly not impossible.