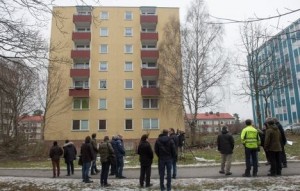 A 20-year long dispute between a German businessman and the government of the Russian Federation may be coming to an end soon after numerous auctions of sovereign property were successfully carried out in Sweden, netting €8 million in the past five months.

The court’s approval of the sales of these properties may set an important legal precedent that could be used by others who have suffered corporate raiding and expropriation by the Russian authorities, says Franz Sedelmayer, the foreign investor.

On Tuesday, February 18, the Swedish authorities concluded the foreclosure sale of a complex that housed Russia’s trade mission in Stockholm for a price of €2.3 million. Russia did not participate in the auction, however, in the weeks leading up to these asset sales, had attempted to make threats via advertisements and media articles that the property was immune, and that the title would not be valid.

The new owner, a local businessman of Turkish descent, has offered the current Russian tenants of the building the opportunity to sign a rental agreement or vacate the property.

Sedelmayer, who in the 1990s set up the JSC Kamenny Ostrov security company in St. Petersburg, saw his properties and assets seized through a 1995 executive order by President Boris Yeltsin, with the help of a lesser known local official at the time, Vladimir Putin.

For almost 20 years, Sedelmayer has brought a range of lawsuits, arbitrations, and claims against Russia’s properties in Europe to recover damages. The Russian government, in turn, steadfastly fought back, citing “sovereign immunity” which protects real estate owned by foreign governments, and also deployed informal levels of influence, including an attempt by Sweden’s Kronofogden (bailiffs) to dismiss a ruling by the Swedish Supreme Court.

At one point, Sweden’s Foreign Minister Carl Bildt even intervened in the case and attempted to instruct the authorities to drop Sedelmayer’s claim against Russia. Bildt was later reprimanded for interfering with the administration of rule of law by the Swedish Parliament’s Constitutional Committee.

Nevertheless, courts in both Sweden and Germany have upheld that sovereign immunity does not apply if a property can be classified as “mixed use” – for example using part of the space for commercial purposes, such as leasing to a third-party tenant – which Sedelmayer says may now be used as case law by others seeking recovery of damages from Russian expropriations.

The auction has provoked fury on behalf of the Russia’s diplomats, who now say that they will execute a “symmetrical” response against Sweden’s diplomatic presence in Russia.

A statement from the Russian Foreign Ministry disputes the sale of the property: “The ambassador was told that the forced sale of the Trade Mission building will inevitably have negative consequences for Russian-Swedish interstate relations. The entire responsibility for such a course of events will lie on the Swedish side. An insistent call was addressed to the Swedish state to take all due measures to guarantee the inviolability and safety of the Russian mission in compliance with Sweden’s commitments under the 1991 Vienna Convention on Diplomatic Relations.”

Earlier in response to Sedelmayer’s legal crusade against Russia’s European properties, a questionable tax claim for some $65 million back in St. Petersburg was brought before the European Courts by counsel representing Moscow – however, this too was dismissed as it was determined that a foreign sovereign cannot levy taxes in another country.

“Their strategy has backfired, and now Russia has set all the precedents on sovereign immunity they should have hoped to avoid,” says Sedelmayer. “The message is pretty clear to foreign investors now – you would be crazy to invest your money in Russia. But now, at least, there is a clear path to recovering damages.”