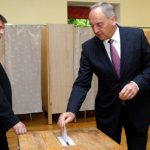 Given the antagonism that surfaces with relative frequency between Latvia and Russia regarding the Soviet ‘occupation’ during World War Two and other historical quagmires, it may have come as a surprise to see that Harmony, the pro-Moscow party which has links to United Russia, has gained the most votes of any party in the Baltic state’s snap election.  The New York Times suggests however that the reasons for the victory may not so much the lure of the Kremlin as low turn out and generalized domestic disgruntlement:

[C]ontinued worries about Latvia’s economy, and, perhaps more importantly, anger with a government that many say is beholden to wealthy businessmen, have pushed many Latvians to seek alternatives, even if it means moving closer to Russia and its rich, oil-fueled economy.

A former Latvian president, Valdis Zatlers, forced Saturday’s elections by taking the rare step of dissolving Parliament this summer when lawmakers refused to grant prosecutors permission to investigate possible corruption by a businessman who is a member of Parliament.

Mr. Zatlers, whose newly formed Reform Party came in second in the vote, has accused a cadre of so-called oligarchs of wielding undue influence.

Harmony Center, which had been the underdog until recent years, has also denounced the authority of the oligarchs and has curried favor with pledges of increased social welfare spending. But it must contend with lingering suspicions over its pro-Russian stance. Particularly contentious have been its close ties to United Russia, Russia’s dominant political party, led by Prime Minister Vladimir V. Putin.

Harmony Center has sought to ease misgivings by presenting itself as transcending ethnic divisions while playing up the benefits of cooperation with Russia.