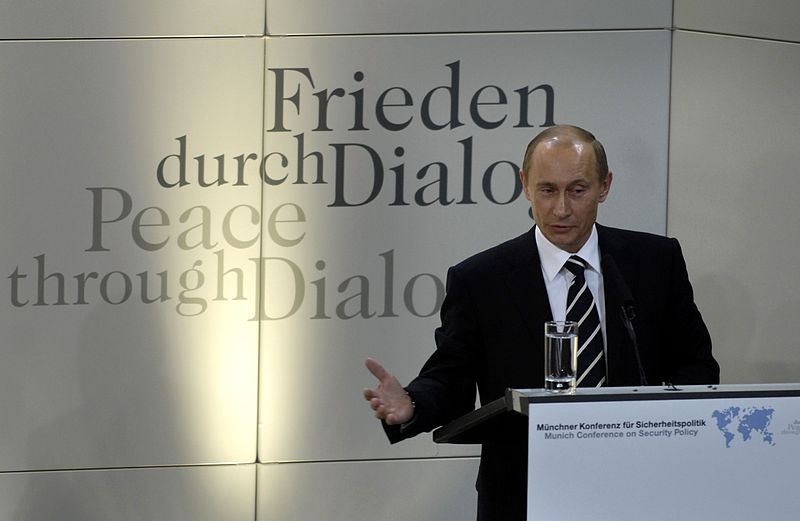 Today the annual Munich Security Conference is kicking off, bringing together some of the world’s most influential voices on security and defense at the Bayerischer Hof hotel. While most people will be analyzing and over-analyzing the meeting between German Chancellor Angela Merkel and Team Trump, I think it is much more interesting to cast a look backward at the past.

Ten years ago at this event, a much younger pre-Botox Vladimir Putin, approaching the end of his second presidential term and only months after the poisoning of Alexander Litvinenko, used his platform at the Munich Conference to aggressively lash out at the perceived injustices of the international system, and lay into the US foreign policy establishment with no small amount of bitterness. It was a real Khrushchev-shoe-banging kind of moment. Here are some of my thoughts on the speech at the time.

This famous 2007 Munich speech was also the opportunity for Putin to elaborate Russia’s worldview (nevermind that it mostly nonsense) and provide what the Kremlin sees as a guiding framework for its role in the world based on the rejection of US-led unipolarity. To quote Putin:

Incidentally, Russia – we – are constantly being taught about democracy. But for some reason those who teach us do not want to learn themselves.

I consider that the unipolar model is not only unacceptable but also impossible in today’s world. And this is not only because if there was individual leadership in today’s – and precisely in today’s – world, then the military, political and economic resources would not suffice. What is even more important is that the model itself is flawed because at its basis there is and can be no moral foundations for modern civilisation.

Don’t you love that characteristic mocking and permanent big chip on shoulder? But he was just warming up. Later came this gem:

Unilateral and frequently illegitimate actions have not resolved any problems. Moreover, they have caused new human tragedies and created new centres of tension. Judge for yourselves: wars as well as local and regional conflicts have not diminished. Mr Teltschik mentioned this very gently. And no less people perish in these conflicts – even more are dying than before. Significantly more, significantly more!

That’s right, the guy who unleashed a disastrous civil war in Chechnya resulting in more deaths and disappearances than a minor genocide is building up his case that the projection of American power must be halted. Or, at the very least, America’s horrifically miscalculated adventures in Iraq should indicate that we need to stop talking about human rights abuses in Russia.  He wasn’t finished of course.

We are seeing a greater and greater disdain for the basic principles of international law. And independent legal norms are, as a matter of fact, coming increasingly closer to one state’s legal system. One state and, of course, first and foremost the United States, has overstepped its national borders in every way. This is visible in the economic, political, cultural and educational policies it imposes on other nations. Well, who likes this? Who is happy about this?

So the guy whose government oversaw the murder of Anna Politkovskaya, the poisoning of Litvinenko (and currently, Vladimir Kara-Murza), the jailing for ten years of Mikhail Khodorkovsky (and current conviction of Alexei Navalny), has a bone to pick on international law with the arrogant neocons in Washington.

But again, you have to admit that much of this text is brilliant – were it coming from someone with an ounce of credibility, enough of this speech makes sense. It’s a patented Russian cocktail of just enough truth, a sprinkling of facts to help the crazy go down.

From here Putin goes on to propose that we reject the current architecture of global security and move toward multipolarity – in others words, Russia is back and demands its seat at the table.

Well, back now in 2017 they certain have that seat at the table, and they certainly find themselves in the news headlines every single day, with an American president who voices many of the same arguments from Munich 2007. Even Germany, as I am writing this, is talking about the US threat to European unity and security.  So the obvious question: is Putin satisfied? Hardly.

More on that to come very soon.