His Money Moves In Mysterious Ways 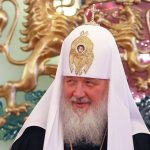 There have been numerous valiant attempts at covering up the Orthodox church’s taste for luxury.  Back in April, divine intervention came in the form of Photoshop, when it was decided that Patriarch Kirill’s taste for expensive fashion accessories was perhaps a little inappropriate.  Now, someone at the Consumer Rights Protection Society has highlighted his Mammonism with flagrant sarcasm.  From Ria-Novosti:

Patriarch Kirill, along with Moscow District Court Judge Igor Kananovich, are eligible for the Nobel Prize in Economics because they disproved the basic tenet of the economic theory that defines the exchange of goods for money as “commerce,” the Consumer Rights Protection Society said.

The watchdog sued the church leadership this summer over the latter’s alleged commercial operations in Christ the Savior Cathedral in downtown Moscow.

The cathedral, most of which belongs to the city government, houses numerous commercial enterprises, including souvenir and jewelry stands.

Church representatives said in court that goods dispensed for money in the cathedral were in fact religious items handed out as free gifts in exchange for voluntary “recommended donations.” Kananovich accepted this reasoning and dismissed the lawsuit.

The explanation is a breakthrough in economic science, which allows the parties involved to ignore economic and tax legislation, as well as regulations on consumer rights, the watchdog said on its Web site.