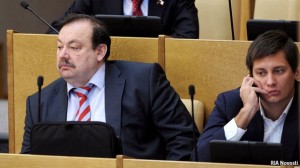 It has just been reported by Ria-Novosti that the Duma has voted to strip Communist deputy Vladimir Bessonov of his diplomatic immunity.  In recent months, the Kremlin has been tightening the screws on the increasingly disgruntled parliamentary opposition, traditionally seen as part of the system of ‘managed democracy’ that is to say, complicit in the ruling structure.  In recent months, A Just Russia in particular has become less and less submissive to the Kremlin yoke, exemplified by the walkout during the protest bill debate, and the activities of Astrakhan’s hunger striker Oleg Shein and the street protest leader Ilya Ponomarev.  Today’s announcement regarding Bessonov prompted another Just Russia member and vociferous Putin adversary, Gennady Gudkov, to say, ‘It’s was a farce and an outrage.  We don’t have a parliament anymore’.  Gudkov himself, as the Economist points out, is no stranger to United Russia’s campaign to de-fang the parliamentary opposition:

Now Mr Gudkov senior is feeling the backlash. He is the target of a tax probe and his private security company, Oskord, has become subject to a campaign of raids and investigations from a variety of bodies, from the fire department to the Moscow architectural committee. Negative pieces about him and his company have been aired on state-run television. His guards in Moscow have lost their licence to carry weapons, all but crippling the company.

Mr Gudkov estimates that he has lost 40% of his business and been forced to lay off hundreds of employees. Contracts have been cancelled by many clients, including well-known multinationals that he accuses of “assisting political repression”. It appears that Mr Gudkov cannot now sell his company, even at a loss—a putative deal was aborted this week after the buyer came under political pressure. The authorities want the company to “simply fall apart”, says Mr Gudkov.