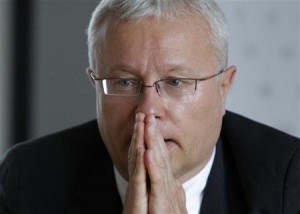 After announcing just yesterday that he feared imminent political prosecution, billionaire Kremlin critic Alexander Lebedev has been charged with ‘hooliganism motivated by political hatred’ over his role in a fistfight on television last year.  The Moscow Times reports that ‘Lebedev punched [real estate mogul Sergei] Polonsky several times in the face over a perceived slight on the talk show NTVshniki’ (although video of the event reveals two swings, neither of which seems squarely to meet their target).  In any case, the charge is the same as the one used to prosecute Pussy Riot, and if convicted, Lebedev could face up to five years in prison.  He has been asked, and has refused, to sign a document that would prevent him from leaving Russia.

If there is any doubt about the political nature of these charges, there are two important things to note: first, that Lebedev’s National Reserve Bank has agreed to put out a debit card that will see a part of all expenditures donated to Alexei Navalny’s anti-corruption project, RosPil; second, that Navalny is the opposition’s most likely candidate to run in a future presidential election, and that he too has been charged (with economic crimes) and faces jail.  These new charges against Lebedev are part of the Kremlin’s current offensive on all dissenting voices.

Lebedev’s lawyer, Genri Reznik, says the charges against the media magnate were ‘absolutely made up’, and that his client ‘has many ‘sins’ (in the eyes of the Kremlin)’.  Lebedev has also claimed that he is the subject of a harassment campaign:

“They are hoping I will leave the country,” Lebedev said. “It’s a standard procedure: first they go against your business, then second is a smear campaign and third is the most threatening weapon – first the threat of prison and then, if you don’t emigrate, you go to trial on some fabricated case.”