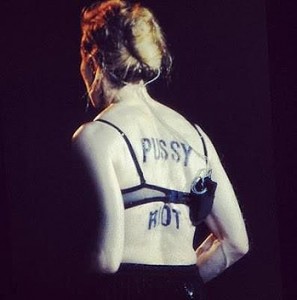 Pop icon Madonna has become the latest musician to lend her support to imprisoned feminist punks Pussy Riot.  Having described the girls’ potential imprisonment as a ‘tragedy’ in an interview with Reuters, at her Moscow concert last night, she paid tribute to the Putin critics, by writing the words Pussy Riot on her back and donning their signature balaclava in front of thousands of fans.  The superstar, who in the 1980s famously danced in front of a burning cross and kissed a black Jesus in an affront to Catholic heterodoxy in her video for ‘Like A Prayer’ also told the audience, ‘I mean no disrespect to the church or the government, but I think that these three girls — Masha, Katya, Nadya — have done something courageous, have paid the price for their act, and I pray for their freedom.’

Back in March the singer had also waded into Russian freedom of expression issues by stating that she would use the occasion of her St Petersburg concert to speak out against the city’s ‘gay propaganda’ law which has effectively criminalised all displays of homosexual behaviour. Now the U.S. Embassy has issued a warning that this event (at which displays of ‘gay propaganda’ are highly likely) could be marred by violence, perpetrated by those offended by the singer’s outré performance and political views. While Madonna exults fans to “express themselves”, it is a sad reality that this may come at a high price.