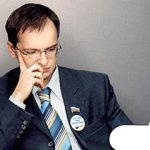 The British historian Orlando Figes, whose study of the Russian revolution ‘A People’s Tragedy’ is generally considered a grand classique of narrative history has come into some problems with his 2007 work ‘The Whisperers’.  His Russian publishers have apparently refused to publish it on the basis of factual errors, a theory seconded by his detractors who have caught him embroiled in prior controversies.  Others argue that the matter is simply political, relating to the tight control of historical material in Russia.  Which brings us to the matter of Russia’s new culture minister, whom Michael Bohm describes in today’s Moscow Times.  Vladimir Medinsky (who was famously accused of plagiarizing his Phd thesis) certainly has his own, shall we say, nuanced take on Russian history, if the following is anything to go by.  From the Moscow Times:

[…] it seems that Medinsky has his own record of history falsification. For example, in a recent interview with Dozhd TV, he said the commonly accepted notion that there was systemic anti-­Semitism in tsarist and Soviet Russia is “greatly exaggerated.” The country’s history of anti-Semitism, Medinsky claimed, was largely limited to the Black Hundreds and a few pogroms more than a century ago.

In reality, of course, state-sponsored anti-­Semitism — including strict quotas on Jews in prominent university departments and professions — from the Stalin period to the end of the Soviet Union was universally condemned in the West. In particular, the United States passed the Jackson-Vanik amendment in 1974 as a sanction against the Soviet practice of limiting the rights of Jews to emigrate.

But Medinsky’s favorite history-falsification topic is World War II. For example, he claims that Soviet troops never really invaded or occupied Poland or the Baltic states, but only “incorporated” them. This is the standard spurious explanation taken from Soviet history textbooks — the same textbooks that explained how for 40 years Eastern Europeans willingly elected Communists to power in free and fair elections in Warsaw Pact countries.

Another Medinsky assertion: When Soviet prisoners of war were returned to the Soviet Union, only 10 percent of them were sent to gulag prisons, while the remaining 90 percent were either sent back into the army or freed from service. Or that the famous photo showing Soviet-German troops celebrating the joint victory over Poland in Brest-Litovsk on Sept. 22, 1939, was “photoshopped.”

Finally, all the talk of Josef Stalin and his generals using millions of Soviet soldiers as cannon fodder in World War II is a lie, Medinsky says. Citing Russian government statistics, he claims Soviet soldier deaths, at roughly 11.4 million, were only 30 percent higher than those of Nazi Germany and its allies, at some 8.7 million.

Those who disagree with him on these points, Medinsky says, often have their own Russia-­hating agenda: to smear Russia’s reputation and falsely present it as a backward, tyrannical and savage country.