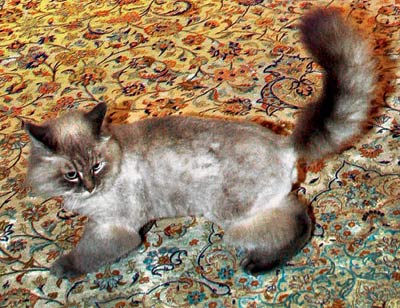 It’s perhaps not really fair to make fun of someone’s pet going missing.  Nevertheless the rumor that President Medvedev’s Siberian forest cat Dorofey had scarpered has proved an irresistible opportunity for Russia’s tweeters to get their claws in.  From AFP:

Russian social media users have been having a field day speculating about the cat’s alleged escape, with at least two Twitter accounts created in Dorofey’s name to post updates of his whereabouts and his decision to join the nascent protest movement.

“I am tired of politics! I want family and kids!” one Dorofey impersonator @Dorofey_Kot tweeted.

The cat’s name — derived from Greek Dorotheos, or the ‘gift of God’ — soared to global Twitter trends as bloggers joked the animal had fled ahead of his owner’s departure from the Kremlin in May.

“The story of Dorofey’s disappearance is rubbish, just as the story of the attempt on Putin’s life,” wrote popular blogger @davidmsk, referring to a reported pre-election plot against the Russian leader.

“It’s meant to bring out human feelings toward the country’s leaders,” he added.

RFE/RL also has a couple of the tweets from this unlikely font of political satire:

#KotDorofei figured out there was nothing left to gain…and left!” wrote one Twitter follower.