Merkel And Medvedev On Quadriga 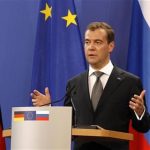 Germany’s Angela Merkel and President Dmitry Medvedev met in Hanover today to discuss strengthening trade ties and energy cooperation.  Since Germany decided to phase out nuclear energy by 2022, Russia has looked happily poised to fill the gaps in the grid with Gazprom exports.  The Quadriga prize debate, written about below, has lurked in the background of the meeting, though many fear that concerns about human rights will play second fiddle to pragmatism and politicking.  From Deutsche Welle:

Germany’s economic relationship with Russia has raised concern among some observers that Berlin would pay less attention to human rights abuses in Russia — an issue that was demonstrated by the recent row over the Quadriga prize.

Medvedev on Tuesday slammed the decision to cancel the award ceremony for the private German democracy prize for Prime Minister Vladimir Putin, as a sign of “cowardice”. The announcement of the award had sparked a wave of protest in Berlin and beyond over Putin’s disputed record on human rights, media freedom and the Chechnya conflict.

“When you have already taken a decision to award a prize, it is taken and reversing that shows cowardice and inconsistency,” he told reporters after a joint cabinet meeting with Chancellor Merkel.

Ahead of the meeting with Medvedev, Merkel said the two sides would discuss their political differences frankly while they sought for common economic interests.

“In a democracy you tend to talk about the things that are not working rather than those that are,” the chancellor said. “It is better to have a row than to sweep things under the rug.”

Medvedev agreed that it was “better to fight than to remain silent.” The Russian president also said he agreed that political reform was important for Russia’s economic future.

“We agree that democracy, human rights and the rule of law are necessary requirements for lasting and sustainable modernization,” Medvedev told reporters.