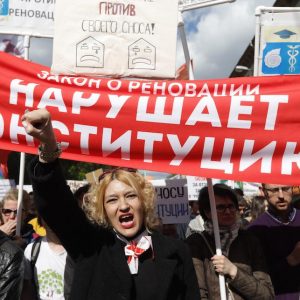 TODAY: Navalny ordered to delete Medvedev corruption allegation video; pressure on those helping his election campaign mounts; court sides with activist over conviction; Amnesty ups pressure on Russia regarding gay purges in Chechnya; Kremlin expels Estonian and Moldovan diplomats; eases some sanctions against Turkey; RT hits back at Macron; how to untie the ruble from oil.

Moscow’s Lublinsky court has ordered opposition politician Alexei Navalny to delete a viral video in which he accuses Prime Minister Dmitry Medvedev of corruption.  The case was brought against him by oligarch Alisher Usmanov, whose reputation, the court ruled, has been damaged by the video.   Navalny has thanked adult video site PornHub for ignoring the ban and uploading the video anyway.  In Siberia, an armed gang has reportedly assaulted a man whose family rented office space to Navalny’s presidential campaign.  A court in the town of Zheleznodorozhny has ordered the Ministry of Finance to pay compensation to activist Ildar Dadin – who was sentenced in 2015 to three years in jail for participating in unauthorised protest rallies – for unlawful criminal prosecution.  Since the Bolotnaya rallies of 2011-2012, political protests have declined in Moscow – but could the city’s immensely unpopular plans for mass housing demolition change that?   Tomorrow, Amnesty International will hand petitions against the abuse of gay men in Chechnya to Russian embassies around the world.

In a ‘retaliatory measure’, the Kremlin has declared two Estonian diplomats and five Moldovan diplomats persona non grata,  just days before the state formally enters NATO, Montenegro’s top politicians have been barred from Russia.  Tensions with Turkey however seem to be easing, as Moscow has lifted some of the sanctions it imposed on the state in November 2015.  A Russian warship and submarine have fired four cruise missiles from the Mediterranean at Islamic State targets near the Syrian city of Palmyra, in the first strike of this kind since November.  Shortly after returning from his meeting with French President Emmanuel Macron at Versailles, Putin gave an interview to Le Figaro in which he heavily criticised his host, who took him to task on foreign policy.  Macron should have known, says this op-ed, that ‘Putin did not come to Versailles to negotiate a way out of the Syrian tragedy.  He came to drag Macron into his political logic, in which the global struggle against terrorism predominates, no matter what.’  Margarita Simonyan, editor-in-chief of state news organization RT, which the French President has lambasted for creating ‘falsehoods’ and showing bias, has commented, ‘We were not against Macron […] We were simply were not for Macron.’

Hillary Clinton has said that she believes U.S. President Donald Trump’s campaign must have counselled the Russian government in its efforts to influence last year’s election.  It would seem the White House has finally had enough of answering questions about the ongoing investigations into Donald Trump’s alleged links to Russia.  As Russia seeks to strengthen business ties with Asia, a consortium of investors led by China’s Fosun International are apparently looking to acquire a 10% stake in its leading gold producer Polyus, for $887 million.  By way of a new fiscal mechanism introduced this year, Russia hopes to stop the ruble ‘acting like an oil currency’.