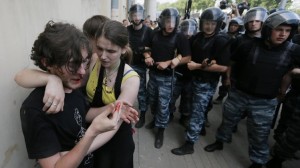 President Vladimir Putin signed into law a bill that bans ‘propaganda of nontraditional sexual relations’, which outlaws gay pride rallies, public displays of non-heterosexual affection, and any activity that can be seen as providing information about the LGBT community to minors.  Dozens of people, both pro- and anti-gay protesters, were detained by police in St. Petersburg after violent clashes at a 100-strong march against the bill.  Some reports indicate that protesters of the bill were outnumbered by local opponents.  U.S. supporters of Moscow’s gay community have apparently come up with a way around the opposition by staging virtual parades.  Alexei Bayer lauds Russia’s gay rights activists for becoming ‘the bravest and the strongest amid pervasive cowardice and apathy of the rest of the population’.  Moscow police seized anti-corruption activist and mayoral candidate Alexei Navalny’s election leaflets at a rally held in support of his candidacy.  The police said that the leaflets were printed earlier than the 40-day limit before the election date within which candidates are allowed to begin their campaigns, making them therefore illegal.  Alexander Lebedev seems likely to avoid a jail sentence for charges of battery, after his plaintiff, Sergei Polonsky, wrote a letter to the judge asking that Lebedev not be put him behind bars.  The first organisation to join the government’s list of ‘foreign agents’ is an anti-trust NGO called Assisting the Development of Competition in CIS Countries.

VTB is anticipating a net profit of over $3 billion this year.  A new anti-money laundering law signed by Vladimir Putin gives tax officials permission to check the bank accounts of individuals.  Rosneft has signed an agreement with the Ministry of Internal Affairs to strengthen cooperation regarding the reduction of crime in the energy sector.  The Moscow government wants to buy the city’s largest tabloid, Argumenty i Fakty; the potential deal, estimated at $75-120 million, could go ahead by the end of the summer. Coal producer Sibanthracite has set a price range for its planned London IPO.

Ecuadorian President Rafael Correa says it is up to Russia to decide the fate of NSA whistleblower Edward Snowden, because he is ‘under the care of the Russian authorities […] the case is not in our hands.’  Mikhail Fedotov, the head of the Presidential Council for Human Rights, says that Russia should take a human rights position on Snowden, and treat him as a refugee.