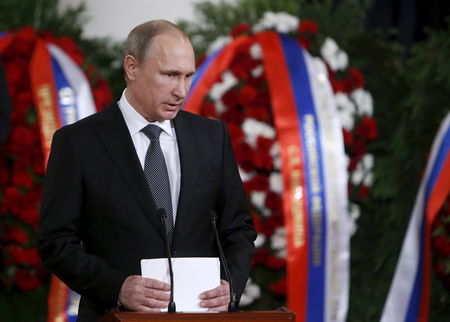 As part of allegations made by Spanish prosecutors about Vladimir Putin’s involvement in a crime ring, the President has been named as the owner of an undeclared property on the Costa Blanca, in contradiction to his public claims that he only owns three properties, all on Russian land.  Gas supply talks between Russia and Ukraine have fallen apart due to pricing disagreements.  As a result, Naftogaz says it will stop buying Russian gas from July 1, a decision which Energy Minister Alexander Novak said is politically motivated.  Gazprom’s ongoing argument with Turkey over gas prices could force a delay in its $15 billion pipeline.  Russia says Canada must expect retaliation and negativity for its newest sanctions against Gazprom and other energy companies.  Russia’s environmental watchdog has opened a case against Rosneft over a leaky pipeline that caused oily water to fill locals’ backyards and taps in Siberia.

Russia’s ban on selected Western food imports has been in effect for a year, and has not delivered the production gains that the Kremlin promised.  Russian investigators are reopening a criminal investigation into the 1998 murder of Nefteyugansk Mayor Vladimir Petukhov, with Mikhail Khodorkovsky as the main suspect. A committee spokesman says Khodorkovsky ‘might have personally ordered this murder and a number of other extremely serious crimes.’  Petukhov had been leading a public campaign against Yukos over alleged tax arrears when he was killed.  Defense lawyers for the former Yukos head dismissed the allegations as ‘fantasies and speculations’.

Russia is unimpressed by a United Nations resolution on the Srebrenica genocide, and promised to present its own measure to mark the 20th anniversary.  Duma deputy Alexei Pushkov says the SCOTUS decision on same-sex marriage is evidence that the U.S. wants to ‘spread’ gay marriage around the world.