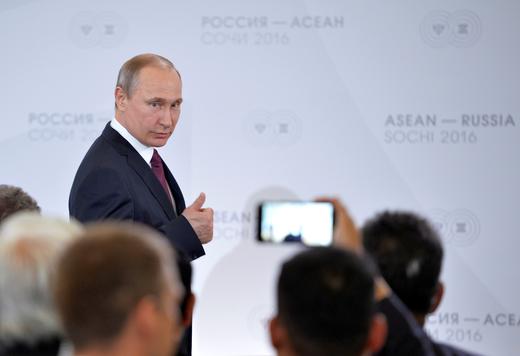 Several Russian government bodies have apparently been hit with a ‘professional’ cyber attack, according to the Federal Security Service (FSB), which did not give any indication of who it thought was behind the attack.  Most major news sources are discussing the hack on the US Democratic National Committee’s emails, still widely thought to have been a Russian job: ‘Security experts believe Russia hacked all 63,000 of Mrs. Clinton’s emails as secretary of state, including the 33,000 emails she destroyed,’ says the WSJ.  Bloomberg agreed, citing ‘mounting pressure on the White House [to deter] Russia’s cyber aggression’ as Clinton herself said ‘we know that Russia […] hacked into the DNC’.  The New York Times says the US media ‘is wildly overplaying Russia’s role’ in the leak.  This piece argues that, during her time as US Secretary of State, Hillary Clinton ‘may have substantially undermined US national security’ for her response to Skolkovo.  Russian lawmaker Sergei Naryshkin says that, if Clinton is the next US President, there will be no improvement in relations with Moscow.  This piece notes how prominent the ‘Russia threat’ narrative has been in the run-up to the US election.  Kremlin-backed Russia Today’s coverage of the election ‘has tended to emphasize a theme of America in disarray’; Russia’s domestic state news organs such as Channel One portray Clinton as an enemy who cannot be trusted.

The Central Bank is holding its key lending rate at 10.5% in accord with an easing up of inflation; the bank says it is still on target to meet its goal of 4% inflation by the end of next year.  It says the rouble rate was taken into account as part of the decision.  The head of a $40 billion Finnish fund says Europe’s relationship with Russia is his top concern regarding the ‘geopolitical flash points threatening to destabilise the global economy’.  The Energy Minister says plans are in place for Russia to discuss the implementation of the Nord Stream-2 gas pipeline with the European Commission.  President Vladimir Putin visited Slovenia this weekend to meet with the President and discuss ‘humanitarian and historic’ issues.  Slovenia described the meeting as ‘strictly informal’.  Google succumbed to pressure from Russia and reversed its decision to change the names of towns in Crimea to comply with Ukraine’s de-communisation law, listing new names for several settlements last week.

Just five days ahead of the start of the Olympic games in Rio, the International Weightlifting Federation disqualified Russia’s team from competing, citing numerous violations of anti-doping regulations.  An IOC panel is to release its decisions on whether or not the athletics team will be allowed to compete just before the opening ceremony.

PHOTO: Russian President Vladimir Putin gestures as he arrives for a meeting with businessmen on the sidelines of the Russia-ASEAN summit in Sochi, Russia, May 20, 2016 (Reuters)