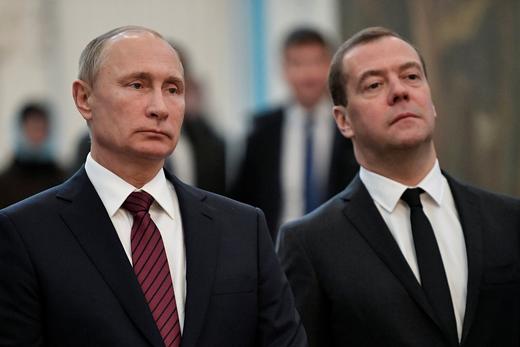 Prime Minister Dmitry Medvedev said his party, the ruling United Russia party, would back a presidential bid by Vladimir Putin if need be (Putin still has not announced his candidacy). What on earth is this “wavy Clip Art banner” doing as the 2018 election logo? Two Russian advertising agencies are on board to increase voter turnout next year. Medvedev has no intention of suing opposition leader Alexei Navalny for accusing him of having a secret, corrupt stash of assets because he doesn’t want to help him win any more publicity. Medvedev said that US-Russia ties are currently the worst he can recall, but that President Trump is “a friendly political figure […] who reacts reasonably towards everything.” The Kremlin then called the US decision to withdraw the press credentials of its broadcaster RT “a very unfriendly step”.

Kremlin spokesman Dmitry Peskov sought to dispel rumors that Russia’s business elite have accused President Vladimir Putin and his circle of causing the current economic slump. Sanctions are in fact, Peskov said, a bid by the US to turn Putin’s wealthiest supporters against him. “We are convinced of this.” Peskov was responding to questions about this story from Reuters, which alleges that wealthy Russians are concerned that their links with Putin could land them on the next US government blacklist, and quotes an unnamed senior figure at an unnamed major Russian company as saying, “People are on edge.” State companies will no longer have to go public with the names of their contractors, making it easier for businesses to avoid consequences from sanctions. OPEC and non-members including Russia have agreed to extend oil output cuts until the end of 2018 to clear the current global crude glut.

Human Rights Watch says Russia is persecuting individuals and groups for posting hyperlinks to websites of “undesirable” foreign organisations: “Ten of the groups lost court cases in which prosecutors argued that linking to a website amounted to inviting Russian users to read these materials, and therefore qualified as ‘participation in the activities’ of the banned organization.” The Kremlin is failing in its goal of countering a worsening HIV epidemic, according to top Russian experts, with 100,000 new infections expected by the end of the year. Russia’s stats this year are the third highest number of new HIV cases in the world. The resurgence of the conspiracy theory that Tsar Nicholas II and his family were murdered in a ritual killing is putting Jewish groups on edge.