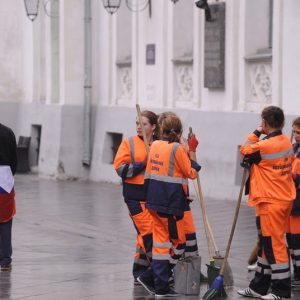 According to the Kremlin, President Putin is willing to seek compromises with his US counterpart Donald Trump at their July 15 summit on “all” issues, save that of the status of Ukraine’s Crimea region, now annexed by Russia. “Putin is a poker player sitting down for a game with a guy who only knows how to play Go Fish and is ready to go all in”: the verdict of this Foreign Policy op-ed on the upcoming meet. Prominent democracy activist Vladimir Kara-Murza has called upon Trump to use the occasion to raise the issue of Moscow’s political prisoners. In an attempt to “preserve glorious military and historic traditions” Vladimir Putin has reportedly decided to name a number of military units after cities or places in Ukraine, Belarus, Poland, Germany and Romania – a move which could be deemed provocative by citizens of said countries. Ukraine has named 23 Russian nationals that it could be prepared to swap for Ukrainian citizens held by Russia in a possible prisoner exchange.

A new two-year plan to combat corruption among officials has been signed into law, but there are reportedly loopholes which could make some deputies immune. Pension reform plans have sent thousands out in protest, but meanwhile hikes in city services prices could also impact the wallets of ordinary citizens. It strikes Andrei Kolesnikov, writing in the Moscow Times, as interesting that opposition leader Alexei Navalny has flung himself into the pension reform protests so heavily, and not made more of the government’s plans to increase VAT, which will “hit economically active Russians, including entrepreneurs and consumers”. Russia believes that cyberspace censorship in the West is “much more developed than in Russia.” Media watchdog Roskomnadzor has undertaken an inspection of German TV channel Deutsche Welle after noting “violations” – it will however allow it to continue broadcasting.

“Judging by the way Moscow celebrated, Russia have won the World Cup.” Or, it seems to Putin’s spokesman Dmitry Peskov, a World War. Reality is they have beaten former World Cup champions Spain to enter the next round of the tournament – and as an encounter filmed and shared on Twitter shows – once the football party is over, Russians will have to confine their celebratory spirit to the private sphere.