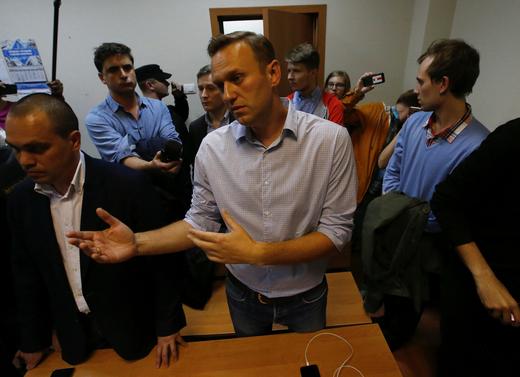 State-run Internet company TransTelecom (owned by Russian Railways, “whose top executives are traditionally close to the Kremlin”) is apparently providing North Korea with an alternative connection to the world wide web, against US efforts to limit North Korea’s connectivity. Otkritie and B&N Bank, the two lenders that were rescued last month, may be merged. Vladimir Putin knows the potential that Russia has to become a giant in artificial intelligence, but the Kremlin may not be able to give the scope to creativity and initiative necessary to see real benefits, says the FT. “Russia’s decades-old obsession with hardware has restricted its ability to develop the human software needed to compete in the modern economy.” Russia’s joint fund with Saudi Arabia for energy sector investments, to be formally announced during this week’s visit to Putin from King Salman Al Saud, will total $1 billion.

Opposition leader Alexei Navalny was sentenced to 20 days in jail yesterday on charges of repeatedly violating the laws that cover public meetings and rallies. Navalny called the sentence “a birthday present for Putin”. This is his third stint in jail this year, after announcing his bid to run in next year’s presidential elections. Teachers across the country have been warning students of the potentially serious consequences of dissenting; students report intimidation and threats of expulsion for taking part in demonstrations. A Bloomberg study suggests that Russia would be one of the world’s top beneficiaries of climate change.

Facebook is to hire over 1,000 employees to help prevent deceptive, politically-targeted advertising, in the wake of its having to provide the US Congress with copies of the 3,000 ads placed by Russian-based buyers during last year’s US presidential elections. Was Russia behind a black activism Facebook page honouring Freddie Gray?

PHOTO: Russian opposition leader Alexei Navalny talks to journalists after he was sentenced by a court to 20 days in jail, October 02, 2017. (SERGEI KARPUKHIN/Reuters)